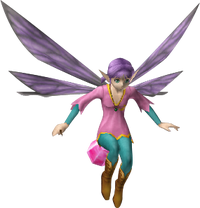 "The most knowledgeable race of fairy, rich in ancient culture, always ready to help and advise."
— Description

Tiramisu is a Level 4 Fairy-Type Innocent Devil appearing in Castlevania: Curse of Darkness.

Tiramisu is considered as a balanced evolution of the Fairy-Type Innocent Devil due to her ability set: a 10-second invincibility, paired with a heal for a price. Due to her Invincible Vase ability, Tiramisu can arguably be considered one of the most helpful Fairy-Type Innocent Devils in the game. While the Gold Heal only proves its effectiveness as a last-resort method in tough boss battles, provided the player has plenty of Gold to pay. Both of these two supportive abilities serve as good reasons to summon the Tiramisu especially in Boss Rush Mode. Her miscellaneous ability to decipher ancient texts is also helpful lore-wise, and might give the player a tip in finding an optional dungeon, or uncovering a weapon and a very powerful ally later in the game.

Tiramisu can be obtained by evolving either a Honey Bee or a Killer Bee:

Since she's a Level 4 Devil, she cannot be evolved any further.

The following table represents the stat gain per level of the Tiramisu.[1]

Tiramisu's evolution tree
Add a photo to this gallery

Retrieved from "https://castlevania.fandom.com/wiki/Tiramisu_(Innocent_Devil)?oldid=298764"
Community content is available under CC-BY-SA unless otherwise noted.