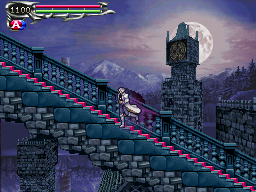 The castle's Top Floor is a type of environment in the Castlevania series.

Usually present near the end of the game, after traversing the Clock Tower and defeating Death, Top Floors generally host some of the game's most powerful creatures and serve as a prelude leading to the final events in a game. Typical layouts include bridges and small Gothic towers housed at the top of Dracula's Castle. Their main function is to build up the tension and work as a transition between the Clock Tower and the Castle Keep, where the final battle with Dracula usually takes place. The iconic large stairway leading to the Throne Room can sometimes be found in these places, although most of the times it's located at the Castle Keep itself.

It's not uncommon to find places where breathtaking landscapes of the Transylvanian countryside can be admired, especially while walking over a bridge: distant mountains covered in snow with their reflections mirrored along vast lakes, all of them surrounded by the intense foliage of trees from nearby woods, all in conjunction evidence the magnificence, power and extravagance of the entities living inside the castle; but sightseeing should not be a priority, least the heroes find themselves overwhelmed by vampire bats, demons, or other rapacious creatures. It's not uncommon to find a crumbling bridge in these areas (especially in the older games), and the hero should be wise into making haste to reach the other side, as a single misstep could send him or her plummeting down to their own untimely demise.

Retrieved from "https://castlevania.fandom.com/wiki/Top_Floors?oldid=264050"
Community content is available under CC-BY-SA unless otherwise noted.