For areas referred to as "clock towers", see Clock and Machine Towers. 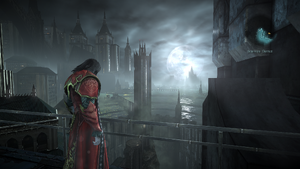 Towers are a recurring type of environment in the Castlevania series.

Perhaps one of the most memorable appearances of a tower in the series is The Leaning Tower of Pisa in Castlevania: Bloodlines, in which the whole level takes place climbing both the tower's interior and exterior. Other times, however, towers only conform a small section of a level, which makes them one of the most frequently used layouts in Castlevania. Yet some other times, a series of towers connected to each other by bridges or tight walkways must be traversed consecutively.

These areas generally emphasize on climbing and platforming through narrow spaces, with the always impending danger of falling to your doom because of a single misstep. Some of the most characteristic enemies encountered in these locations are Medusa Heads and Flying Skeletons, who fly slowly from one side of the screen to the other in endless waves. Due to the nature of these types of environments, maneuverability to fight them can become compromised; however, receiving a hit while climbing a set of stairs will usually prevent the player from being knocked down to their untimely death.

A boss usually awaits at the top of the tower, and defeating it generally means the end of the level or allows access to a valuable item which grants further progress elsewhere in the castle.

Stages that have the main layout of a tower or which contain relevant towers within them:

Retrieved from "https://castlevania.fandom.com/wiki/Towers?oldid=281452"
Community content is available under CC-BY-SA unless otherwise noted.