Antagonist, possessor of one piece of the Mirror of Fate, victim

"Time to play!"
— The Toy Maker before his confrontation with Gabriel.

The Toy Maker's appearance remains a mystery for the majority of the game. His first appearance is on a painting on a wall, and his face appears on the stained-glass windows of the Toy Maker's Workshop. He is first truly seen near the end of Trevor's journey. He wears red glasses, an outrageous red outfit, and his skin is of an unnatural blue hue. His nose is notably large and pointed, and his teeth are long and sharp.

His appearance before the curse placed on him is only suggested through stained-glass windows and official artwork. As a human, the Toy Maker's glasses were clear, his skin was of a normal color, his nose smaller, and his hair shorter.

At a time, the Toy Maker was the brightest pupil of Rinaldo Gandolfi. However, he much preferred to build toys for children and the skill that gave him his nickname made him legendary across the lands. However, hearing of his skill was one Walter Bernhard, a member of the Bernhard family, who offered him a place in his castle to make his craft.

The Toy Maker didn't realize until it was too late that Walter came from a family of dark occultists who summoned a demon to possess the kind soul, twisting his craft in the darkest way and making for the castle's Master weapons of death and destruction, some being the Dark Pain, the Stopwatch, the Macabre Puppet, and Gargoyles.

However, the demon couldn't completely corrupt the Toy Maker's kind soul, resulting in something of split personality: the original kind old man, and the childish and sadistic demon within. Sometime during this period, after being touched by the puppet of a child, seeking to save his soul from the demon within and escape Bernhard, who had discovered he had regained his innocence, he removed his heart, putting himself into a deep slumber.

His fate while Carmilla overthrew Bernhard and took the castle for herself is unknown, straight through until Gabriel Belmont — rechristened "Dracula" — took over in her place.

Through the events of Mirror of Fate, the Toy Maker returns somehow, but was a largely unseen presence. After the Daemon Lord's death at the hands of Trevor Belmont, the Toy Maker watched on. He then used its remains to rebuild it, using the demon to gather souls for his experiments. During Alucard's journey, he passes through the Toy Maker's workshop and assembly line, and stops the deadly carousel that threatened to kill Simon Belmont.

He mentioned that after Dracula's apparent defeat at the hands of Simon Belmont and Alucard, he scavenged the area and found a fragment of the Mirror of Fate. He then went back to rest. 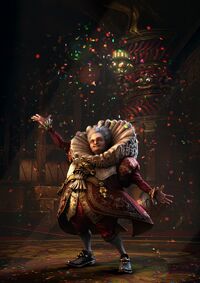 As he continued to search his castle for fragments of the Mirror of Fate for Trevor, Dracula makes his way through the Puppet Theatre and, after viewing and orchestrating a small puppet show telling of his backstory, discovers the Toy Maker's lifeless body and returns his heart to bring him back to life.

The Toy Maker, who initially suffers from partial amnesia due to the centuries of lethargy, does not initially recognize Dracula, but nonetheless show kindness to the man and is more than willing to give him the fragment of the Mirror Of Fate he had claimed in the previous game.

However, just as the Toy Maker hands the fragment to Dracula, the corrupted blood of the castle spawns beneath the old man's feet and pulls the terrified man under, possessing him. Bound by strings of blood (mimicking that of an actual puppet), he takes up control of the mechanical Puppet Master and launches a full assault on the Prince Of Darkness using a knight and a dragon puppet as means to subdue him.

After having dispatched and utterly destroyed the puppets, Dracula confronts the Toy Maker inside the Puppet Master's head, and successfully manages to ground the giant puppet and destroy the mask-like cover that hid and shielded the twisted master of the titanic mechanical device. Not willing to give up, the Toy Maker makes the arms of the Puppet Master act as legs to make it walk and attacks Dracula once again, exclaiming: "Let's see how well you play your death scene!"

Dracula, currently without any powers that would allow him to scale the mechanical menace, resorts to utilizing his various projectiles to shoot at the Toy Maker from afar, causing the possessed man to lose control of the Puppet Master and fall to the ground. After repeating this process a few more times, he finally defeats the Toy Maker and proceeds to throw him out of the now heavily damaged Puppet Master and on to the ground a few feet away.

Upon his defeat, Dracula summoned the Void Sword and prepared to strike the mad puppeteer down. However, before he could do this, the Toy Maker suddenly began to regurgitate the castle's corrupted blood and reverted back to his normal self. Dracula decided to spare the man and pulled back as the Toy Maker recovered from his possession. After an initial shock, the Toy Maker began to frantically question what had happened to him and what had he said while under the influence of the blood. Dracula reminded him that he was about to give him his Mirror of Fate fragment, to which the Toy Maker dazedly complies. The old man then finally realizes who his visitor really is and backs away in fear. Having now collected the fragment he had come for, Dracula then bids the old man farewell, telling him to: "Guard your heart well."  With nothing else left to say, Dracula departs from the theatre, leaving the Toy Maker alone as he breaks down and cries.

Afterward, should Dracula choose to return to the Puppet Theatre, the Toy Maker will be nowhere to be found. Currently, It is unknown what became of him after his encounter with the Prince of Darkness, although it is assumed he is still active as he now once again bears his heart.

When controlling the Puppet Master