This Demon is a distinguished soldier of Satan that Dracula encounters on the train, and is the first Satan's Soldier that he successfully manages to defeat. Unlike the other Soldiers that are encountered, the "Train's Demon", as it is referred to in concept art, has a unique black-and-red coloration, similar to that of Abaddon, a half-missing face, and horizontally-inclined horns rather than the vertical horns of the other soldiers. The demon engages in prolonged combat with Dracula on the train, killing the train driver along the way in order to prevent Dracula's survival. In spite of its efforts, Dracula manages to escape from the out-of-control train, and the demon is killed when the train crashes. 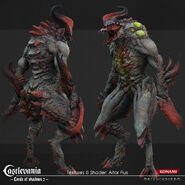 Retrieved from "https://castlevania.fandom.com/wiki/Train%27s_Demon?oldid=285318"
Community content is available under CC-BY-SA unless otherwise noted.