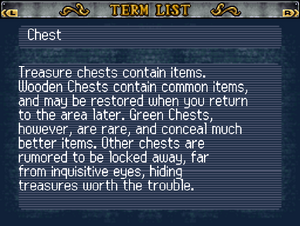 Treasure Chests (宝箱, Takarabako?), Chest, Treasure Box or Item Boxes, appear in various Castlevania titles. They usually contain gold or various types of items (some of which are very rare).

Some treasure chests (worth $2,000) are hidden within the chambers of Dracula's Castle. Similar to other hidden treasures found in the game, to make a chest appear Simon has to stand in one particular spot for five seconds.

In Vampire Killer, treasure chests contain various types of items. A yellow key is required to open them.

An unused, flashing treasure chest exists within the game's coding among the other money objects, but it isn't found anywhere in the game. It is fully functional and will give the player $5,000 in gold if collected, which is worth more than any other item in the game. The reason why it wasn't included in the game is unknown. It can only be added in through a cheating device and then slashing certain candles to make it appear.

Breakable treasure chests can be found in some rooms. They are not really an item, instead they function similar to candles and they will produce large amounts of gold coins when broken. The chest near the end of the Forbidden Area contains a horde of Rippers.

All chests in Curse of Darkness are initially locked with a magic seal. Only Fairy-Type Innocent Devils are able to open them via their innate Unlock ability, so it's a good idea to always carry one in Hector's deck.

Different types of treasure chests can be found hidden in almost every location of the game. There are five different types:

Unused flashing treasure chest from Symphony of the Night

Mimic from Dawn of Sorrow and Portrait of Ruin

Mimic from Order of Ecclesia and Harmony of Despair

Harmony of Despair gamerpic
Add a photo to this gallery

In Block 2 - Stage 05, standing on top of this elevated platform will make a Treasure Chest to appear

Chest from Curse of Darkness

Blue Chest containing the Magician Ring in Order of Ecclesia

Blue Chest containing Blue Drops in Order of Ecclesia
Add a photo to this gallery
Retrieved from "https://castlevania.fandom.com/wiki/Treasure_Chest?oldid=271079"
Community content is available under CC-BY-SA unless otherwise noted.