"Trevor has a quick whip and even quicker wit. He's not one to be messed with."
— Trevor's profile description

Trevor Belmont (トレバー・ベルモンド, Torebā Berumondo?, Trevor Belmondo) is one of the main protagonists in the Netflix original series, Castlevania. He is a vampire hunter and the last descendant of the Belmont family, who were (wrongfully) exiled and excommunicated.

He is voiced by Richard Armitage in the English version of the show.

Trevor was the last surviving member of the Belmont clan, a family who dedicated their lives to fight creatures of darkness commanded by Count Dracula and protect mankind. However, rumors spread that the Belmont clan practiced black magic attracting evil to them, causing the family to be exiled and excommunicated by the Church, with everything the family owned being razed and destroyed by the people they swore to protect, eventually leaving Trevor all on his own at an early age.

In 1476, Trevor came across a village where a few of its inhabitants accused his family of practicing black magic. After fighting and defeating them, he fled from the village. He then came across the town of Gresit, a fortified city that was not yet overrun by Dracula's army. Making his way inside, Trevor talked to the citizens and learned of a legend of a "sleeping soldier" who slumbered beneath the city. While walking through the streets, he spotted an elderly man being harassed by two abusive priests. Although he wanted to walk away, he reluctantly saved the old man by brutally defeating the priests. Escorting the Elder back to his hut, Trevor met the Speakers, a group of scholars persecuted by the Church and falsely blamed for the attacks by Dracula's monsters. Persuaded by the old man to find his grandchild who had gone to find the sleeping soldier, Trevor complied, on the condition that he and his fellow scholars left Gresit and hide from the Church.

Exploring the catacombs, Trevor discovered "hot pipes" and "torches that light themselves". After falling through the floor, he encountered a Cyclops that turned its victims into stone. Trevor battled and killed the monster, freeing one of its victims from the stone prison. It was none other than the Elder’s granddaughter, Sypha Belnades.

With her determination to find the sleeping soldier, Trevor convinced her to return to her grandfather to put his mind at ease, believing that the tale of the sleeping soldier was nothing more than a myth. Upon their return, Trevor once again argued with Sypha about the myth, convinced that the catacombs were a part of Dracula's castle based on his ancestors writings. He told the elder to leave, but was convinced by the old man to stay in town until sundown. Stepping out of the hut, Trevor found himself surrounded by priests, who brought him to the Bishop. Offered a pardon and his life, Trevor was ordered by the Bishop to leave Gresit while the Speakers would be executed.

Returning to the Speakers, Trevor warned them of the Bishop's insane plans for their demise. He tried to convince them to leave the city, but instead found himself lectured by Sypha and her grandfather, who resolved to stay and fight their own battles. Reluctantly pushed by their convictions, Trevor hid the Speakers in the catacombs and confronted the citizens of Gresit alone. He fought his way through the priests and was chased by a mob, but was eventually saved by Sypha who utilized magic. Trevor then convinced the people that the Bishop and the priests of the Church were the ones responsible for the monsters' attacks. The angry mob attacked the leader of the priests, killing him. With the villagers under his command, Trevor instructed them to kill Dracula's monsters, explaining how to do it. After they defeated the monsters, including Blue Fangs, the surface became unstable, causing Trevor and Sypha to fall through the ground and land deeper inside the catacombs than they were before.

Avoiding the traps of the catacombs, Trevor and Sypha eventually found a coffin. They discovered a "vampire", whom Trevor believed to be Dracula but Sypha believed to be the sleeping soldier. Mistaking the vampire's intentions, Trevor fought him and eventually landed a slash on his chest only to be pinned down moments later. Desperate, Trevor stabbed the vampire in the chest with a knife with the intent on killing the vampire even at the cost of his own life. But to his surprise, the vampire spared him and introduced himself as Alucard. Alucard had waited for a hunter and a scholar to find him, as predicted by the prophecies of the Speakers. Convinced by Alucard that the three of them could defeat Dracula together, Trevor led the group as they began their journey.

The fight against Dracula

Needing a strategy to defeat Dracula, Trevor and Sypha turn to Alucard for information. He tells them about Dracula's ability to teleport his castle, and the trio come to the conclusion that they will need a way to stop that from happening so they can attack the castle. Trevor suggests that they head to the Belmont Estate; over the years the Belmont family fought monsters, they amassed a large collection of information and artifacts in a hidden vault. Trevor believes that if the information they need is anywhere to be found, it is there.

Heading out on the road, Trevor starts to get closer to Sypha while constantly verbally sparring with Alucard. While camping for the night, the group is attacked by night creatures. The three of them dispatch the creatures, although one survives and escapes.

At the Belmont Estate, Sypha opens the vault using magic, revealing that the Belmont family dabbled in the magical arts. Below in the vault, the group finds a vast trove of information and equipment. Sypha is amazed at the amount of information present, although Alucard is disturbed by a collection of vampire skulls and the feeling that the entire collection is dedicated to killing his species. Trevor is amazed to find the Morning Star hidden among the equipment and immediately claims it for himself.

Sypha discovers that a member of the Belmont family was already working on the problem of Dracula's moving castle and was developing a spell to lock the castle in one place. It is unfinished but Sypha believes she can finish it. As she works, a group of night creatures arrives above and tries to force their way into underground vault. As Sypha and Alucard work to finish the spell and locate Dracula's castle, Trevor fights off the horde of night creatures using all of the weapons at his disposal, including the Morningstar.

Trevor manages to successfully kill all of the attacking monsters just as Sypha and Alucard succeed in bringing Dracula's castle to above the Belmont Estate. The trio attack the castle, fighting their way through the vampire army until they face Dracula himself. Though Trevor manages to hit Dracula with the Morning Star, it still is not enough to kill Dracula.  Dracula attacks the trio with his Dark Inferno spell, but the trio works together to push it back.  Alucard, who is near Dracula when the trio counters Dracula's attack, begins to fight his father in a vicious melee duel that wrecks the castle in the process. Eventually, Dracula breaks down when they reach Alucard's childhood room and allows his son to stake him in the heart. Trevor and Sypha arrived and helped to finish him by beheading Dracula and setting fire to his remains.

With Dracula dead, Trevor hands over stewardship of the Belmont Estate to Alucard, who had been planning to end his own life. Sypha convinces Trevor to continue adventuring with her since she believes that Trevor's destiny is to fight evil. Bidding farewell to Alucard, Trevor accompanies Sypha as they first head to find the Speakers before heading on to face the remains of Dracula's army at Braila.

Trevor draws many parallels to Dracula in that they have both become misanthropic as a direct result of the Church wrongly prosecuting them and their loved ones. This parallel is exemplified by their very similar statements regarding how the citizens of Wallachia reacted to the Church's misdeeds. Dracula said of the citizens who watched his wife burn that anyone of them could have stood up and said: "No, we won't behave like animals anymore". Trevor similarly observes of the Church and the citizens that "For evil bastards to win power, all ordinary people have to do is stand aside and keep quiet". At the start of season one, both men hold all the citizens of Wallachia to varying degrees of responsibility for the sins of the Church's leadership.

Unlike Dracula, who is actively killing humans out of misanthropy, Trevor has simply become cynical, blunt and apathetic to the citizens of Wallachia. At the start of Season 1, he is still a protector at heart but sees his assistance and knowledge as being unwanted due to his excommunication. Feeling that he has no purpose, he lives as a wandering alcoholic who protects himself and is content to let citizens suffer the fate they have allowed to befall themselves.

Trevor still has a soft spot and protective attitude toward those who have been wronged as he has. He is drawn into the battle for Gresit when he decides to defend the Speakers, who are helping the townsfolk from the church's prosecution. He is acutely aware of the dangers of prosecution and seeks to be a protector in that capacity for the Speakers. However, the Speakers own idealism and the developing battles in Gresit slowly change Trevor and reawaken his familial purpose.

At his core, Trevor is a firm believer in the Belmont's values; protecting and fighting for the people of Wallachia. This is likely what separates Trevor's degree of misanthropy from Dracula's. Trevor's debates with the Speakers to help him re-find his path to following these values. As observed by the Speaker Elder, Trevor is a "defeated" man who decided he had lost his battle for the soul of the country when he was excommunicated. The Speakers inspire Trevor by helping the people even when they are hated by them and being more afraid of not fulfilling their righteous purpose than being killed. Trevor realizes he too fears not being able to fulfill his purpose to fight for the people of Wallachia, and that the citizen's hatred or closeness to him are, in fact, irrelevant to his choice. By the end of Season 1, Trevor's idealism is debatable but he has certainly found purpose as being the protector that a Belmont is meant to be.

When it comes to monsters, Trevor is prone to quick judgment and intolerance. This is best exemplified when he attacks Alucard. In Trevor's words regarding killing Alucard: "You have fangs and you sleep in a coffin. That's good enough for me". In his battle with Alucard, he shows he is willing to die if it would mean Dracula's death, and considers surviving to be "a luxury".

Trevor with his two comrades

Trevor in "The River"

Trevor and co. arrive at Dracula's Castle during a blood moon.

Trevor in "For Love"

Trevor and Sypha discuss next steps in "End Times" 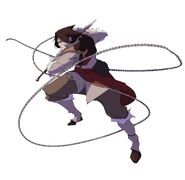 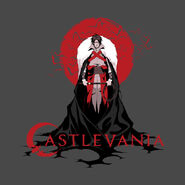 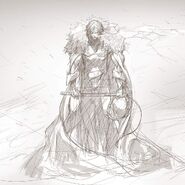 Facial sketches by Samuel Deats
Add a photo to this gallery 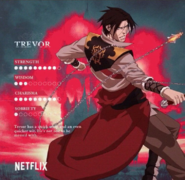 Retrieved from "https://castlevania.fandom.com/wiki/Trevor_Belmont_(animated_series)?oldid=270921"
Community content is available under CC-BY-SA unless otherwise noted.