Leaps and swipes at the hero

The Under Mole is an enemy in Castlevania: The Adventure. They are little creatures with long arms and no facial or body features, and which barely resemble a mole. Their hands and feet lack fingers and they only end in a big claw-like shape.

Under Moles hide out in several holes in the Caverns' walls and a whole group of them must be faced as a boss fight at the end of that level. There are twenty Under Moles in total which must be defeated to continue to the next level; they leap out from four holes on the wall, do somersaults, and try to overwhelm the player with their vicious claws. 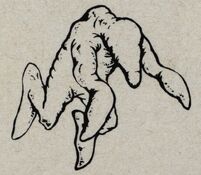 Under Mole from The Adventure instruction booklet 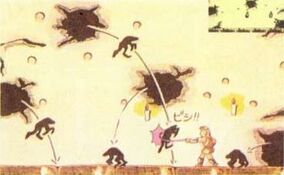 Under Mole boss from The Adventure

Retrieved from "https://castlevania.fandom.com/wiki/Under_Mole?oldid=272337"
Community content is available under CC-BY-SA unless otherwise noted.