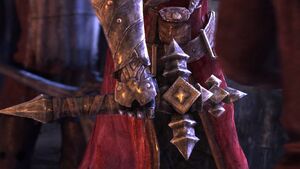 The Vampire Killer is the greatest Combat Cross that Rinaldo Gandolfi ever created in Castlevania: Lords of Shadow. It was entrusted to and used by Gabriel Belmont, the one foreseen to defeat the Lords of Shadow, but also fall into darkness. 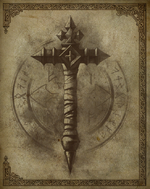 During Gabriel's journey, the Combat Cross is called the "Vampire Killer" by the surviving villagers of Wygol after saving them from a vampire attack.

While the origins of the cast iron body are shrouded in mystery, the main additions were made by Brotherhood of Light artisan and alchemist Rinaldo Gandolfi. Although some of his designs were rejected by the Brotherhood elders, he hid them away in Order mausoleums, hoping that the prophesied warrior would happen upon them in his time of need. 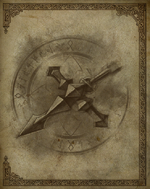 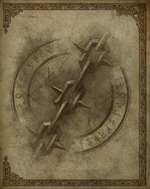 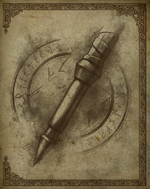 The officially sanctioned addition for the Combat Cross, and the only addition that Gabriel starts with, is the Iron Chain Whip. Forged of cast iron, then drenched in holy water and blessed, the chain whip is very effective against the evil creatures that roam the countryside. It was also added to increase the Vampire Killer's combat effectiveness.

As Gabriel wanders through the Dead Bog, he finds the mausoleum containing the Hook Tip addition. The articulated metal tip can be used as a grappling hook, allowing Gabriel to climb, swing, and rappel around the environment. It is also used to grab enemies from a distance.

The second addition that Gabriel finds is the Spiked Chain, which is found in the underground caves leading to Agharta. Gandolfi made two different chains, although the Order elders disapproved of the Spiked Chain, deeming it too cruel for such a holy weapon. But instead of destroying the chain, he hid it away. The 1 1/2 inch long spikes allow Gabriel to saw through wooden obstacles with ease, but an added benefit allows him to "tame" large enemies that can be ridden on like mounts. Contrary to popular belief, the Spiked Chain does not increase the amount of damage that Gabriel deals.

While searching for a way into the Wygol Village abbey, Gabriel finds an Order mausoleum in the village cemetery which contains the Stake addition. Gandolfi wanted to give the Cross more options for hand-to-hand combat, leading to his adding a stake to its bottom. Due to the attachment being made specifically for destroying vampires, it gave the Combat Cross the nickname of "Vampire Killer". The stake has an additional purpose in allowing Gabriel to open floor-oriented wheel cranks that are without a crowbar. While it shows him breaking the stake off in Carmilla's chest, half of the stake still remains in a broken, frayed form, thus still very usable.

At the end of the Resurrection DLC, Gabriel takes the Vampire Killer in hand and shatters it into  several pieces, leaving them lying broken and forgotten within the Underworld.

In Castlevania: Lords of Shadow - Mirror of Fate, Gabriel's son, Trevor, uses a replica of the same weapon and as a tool to slowly descend down walls much like the shadow claws. Later, it is recovered in a weaker state by Simon, the son of Trevor. A Necromancer steals it, stating that his master, Zobek, wants it, and battles Simon. Simon defeats him and pulls the cross out of the Necromancer's remains, and is able to use the weapon to use grip and rappel points.

Trevor is able to upgrade his replica Combat Cross into the Improved Combat Cross with the attachment of Rinaldo Gandolfi's "last creation", a spike he hid inside of the Bernard family castle, that allows it to penetrate locked doors and shatter them.

At the end of the game, Alucard manages to find a piece of the original Vampire Killer, the stake attachment that broke off in Carmilla's chest in the first game, and absconds with it as the castle collapses.[1]

Alucard used the Vampire Killer's broken stake to forge the sword Crissaegrim that he used with his father's consent to put him into a deep slumber as part of his master plan. 1000 years later, Zobek, who had found the Vampire Killer's shattered pieces and rebuilt it, would offer to use it on Dracula in exchange for helping him prevent Satan's return, as he states the weapon is the only thing capable of ending Dracula's immortal existence. The weapon was taken by Dracula from Zobek after his defeat, and was used to kill Satan.

Although the Vampire Killer itself gets no permanent damage upgrade or has any outstanding supernatural powers, Gabriel can use either Light or Shadow Magic to augment his attacks in different ways.

The Vampire Killer is the only weapon capable of truly killing an immortal being. As such it is the only weapon that is able to kill Dracula for good and grant him his eternal rest, though it should be noted that only one Lord of Shadow, Carmilla, is actually killed by the Vampire Killer. Cornell is killed by his hammer's broken handle and Zobek, though burned by Satan in the first game, seems to have been killed by Dracula's Void Sword in Lords of Shadow 2. However, it appears to be the only weapon capable of killing Satan since Dracula uses it against him (suggesting the Void Sword being useless for the final blow). 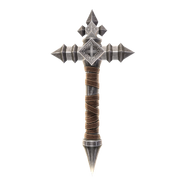 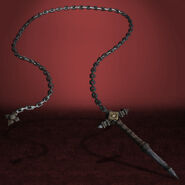 Gabriel Belmont with the Vampire Killer.

Español
Community content is available under CC-BY-SA unless otherwise noted.