The Vampire Killer, also known as Holy Whip or Magic Whip, is the legendary whip wielded by several heroes of the Belmont Clan in the Castlevania series.

"If my soul can save others... then I will not die in vain"
— Sara Trantoul

The whip was originally a less powerful magic weapon created with alchemy by Rinaldo Gandolfi prior to Castlevania: Lament of Innocence, known as the Whip of Alchemy. Eventually, it was transformed into a far more powerful weapon after the death of Sara Trantoul, the betrothed of Leon Belmont, wielder of the Whip of Alchemy at that time. Sara, who had been fatally cursed with vampirism, had to willingly sacrifice herself to make the whip "whole" and able to defeat powerful vampires. This was because the whip needed a willing, yet tainted soul to unlock its true potential.

This whip not only does serious damage to vampires, but to any demon. Even the Grim Reaper, Death himself, is damaged by the whip. As Leon says at the end of Lament of Innocence - "I have the power to destroy all related to the vampires. Though you have divine powers, you are no exception." Even powerful beings regarded as gods were not safe from harm any longer. Because the whip was made with alchemy, it could be an explanation for how it can turn from a leather whip to a chained flail.

The Vampire Killer was first used to destroy Dracula in 1476 by Trevor Belmont. After this, it was passed down through the generations of the Belmont family until the 18th century, when it came into the possession of Richter Belmont. After Dracula's defeat by his son, Alucard, in 1797, the Vampire Killer disappeared and the duty of opposing Dracula was taken up by organizations such as Ecclesia. Although the whip's exact location went unknown for a long time, it was revealed that the whip was passed by Richter Belmont to the Morris Clan [1], who were entrusted with guarding the whip until the Belmonts resurfaced to reclaim it.

The Vampire Killer can be upgraded in most games by collecting a Morning Star symbol; changing from a leather whip to a chain whip, then to the morning star. Alternatively, in Castlevania II: Simon's Quest, upgrades to the whip are purchased. The first upgrade is a Thorn Whip, which increases its attack power and also the length of the whip slightly. The next is the Chain Whip, which raises the whip's attack power. The last upgrades are the Morning Star Whip, which extends the length of the whip again while increasing damage, and finally the Flame Whip, which maxes out the Vampire Killer's power.

In some games, the whip can be left dangling or spinning by holding the attack button. It helps by protecting against projectiles and weak, hard to hit enemies such as Medusa Heads and Flea Men, but does comparatively little damage.

In Castlevania: Portrait of Ruin, it is revealed that use of the whip by a person who is not a direct descendant of the Belmont clan is potentially deadly, and that it was indeed the Vampire Killer that killed John Morris, whose life was drained away by the legendary weapon. However, before it can reach this level of power, the specific indirect descendant who wants to use the Vampire Killer must undergo a trial to unlock its true strength. Otherwise, the whip will not manifest its legendary power, and seem for all intents and purposes to be a fairly ordinary leather whip, inferior to most kinds of combat weaponry. One thing to note is that when not fully powered up, the whip looks the same as a steel whip; however, when fully powered, the whip glows red, green and blue, all within the length of swinging the whip. It's possible that this is the true appearance of the Vampire Killer's power, because this is the only difference in appearance between the two. Many other games, such as Rondo of Blood, Bloodlines, etc. also shows the whip glowing multiple colors while landing ordinary attacks. John's son, Jonathan Morris, is given the opportunity by the daughters of Eric Lecarde to unlock the whip's true strength at the potential cost of his life; whether or not Jonathan takes them up on this offer is up to the player (although Jonathan's health is not impacted by use of the whip, nor is he negatively affected in any other way).

In Castlevania: Grimoire of Souls, it is revealed that the Vampire Killer whip also has a distinct reaction to any vampires in the vicinity, and that its reactions are acute enough to also detect dhampirs as well. This also caused initial problems when Simon Belmont formally met Genya Arikado, where he initially thought the latter was one of Dracula's vampire minions and intended to put the latter down until both Arikado and Lucy Westenra revealed he was in fact Alucard, and also gave Richter initial hesitance by Alucard's presence to escape to safety before deciding the latter was ultimately on his side due to Maria Renard being present with him.

In Haunted Castle, the whip can be replaced by a Morning Star, then a Sword.

In Castlevania Legends, the first upgrade turns the whip into a chain whip that doesn't add any range, and the second will make it shoot fireballs when swung, just like the other two Game Boy titles.

In Rondo of Blood, the whip cannot be upgraded, but if the player has no sub-weapons, Richter can use a special Flame Whip attack. The same is true in Castlevania: Symphony of the Night, where the whip is imbued with fire for a fixed amount of time. As a boss, Richter uses the Flame Whip during the second half of the battle (after using Hydro Storm).

In Castlevania: Bloodlines, the whip can become a Flame Whip if John can get a third upgrade item, but the effect will vanish upon taking damage.

In Castlevania: Harmony of Dissonance, Juste can augment his whip with many magical artifacts, including the Morning Star, elemental stones, a charm that makes it launch fireballs when at full health, a charm that allows the whip to constantly spin when the B button is held a la Castlevania: Circle of the Moon, and finally a charm that allows for the charging of energy in the whip, transforming it into an energy wave.

In Castlevania: Curse of Darkness, several elemental whip upgrades are hidden throughout the stages in Trevor Mode. Trevor can collect and equip them to inflict different types of elemental damage.

In Castlevania: Portrait of Ruin, the player stars with the Vampire Killer as their starting weapon as usual. However, it is one of the weakest weapons available throughout the majority of the game, although it can later be upgraded into one of the most powerful, if not the most powerful weapon, after defeating the optional boss known as Whip's Memory. Distinctive to this game, the Vampire Killer has the ability to strike twice per whiplash, the second strike dealing roughly 7% the amount of damage of the first one. This behavior only manifests once the real power of the whip has been unlocked. The player is also able to use the Flaming Whip Critical Art, doubling the attack power of the already powerful strike. It is without a doubt the most useful of the Critical Arts in the game against Final Guards, as well as against the Iron Golem lying in wait in the optional Nest of Evil. All these traits make the Vampire Killer even more powerful than the expensive Holy Claymore in many instances. Storywise, it serves as the best weapon to use against Dracula due to its ability to strike twice with the Holy attribute. 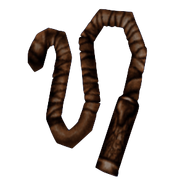 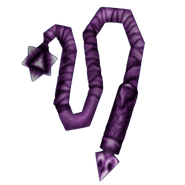 Castlevania: The Adventure ReBirth
Add a photo to this gallery

Retrieved from "https://castlevania.fandom.com/wiki/Vampire_Killer_(whip)?oldid=286987"
Community content is available under CC-BY-SA unless otherwise noted.