For other uses, see Frankenstein (disambiguation).

The Battle of Old Castle
Doctor Victor von Frankenstein, or simply Dr. Frankenstein, is a character created by Mary Shelley in 1818, and the main protagonist of her acclaimed novel, Frankenstein.

Victor Frankenstein was a medical student from Genève who researched life and how to create it. He went into graveyards to exhume corpses and create an artificial creature with them. His creation is known as The Creature, who has been a recurrent boss in the Castlevania series.

Victor does not make any appearances in the Castlevania games (two unidentified corpses located in the area the Creature is fought in Haunted Castle and Portrait of Ruin notwithstanding), but he does appear in the game book The Devil Castle Dracula: The Battle of Old Castle, where he is referred to simply as "Dr. Frankenstein". In addition, a similar character called Friedrich von Frankenstein was mentioned in the lore for Castlevania: Lords of Shadow, where Carmilla kept him alive for an indeterminant amount of time to torture him out of what is implied to be punishment for his gruesome experiments upon becoming a Lord of Shadow. 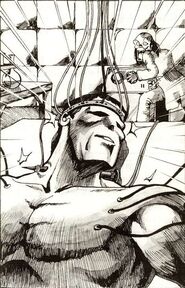 The Creature (front) and Dr. Frankenstein (background) from The Battle of Old Castle

Possible corpse of Dr. Frankenstein in the Dark Academy.
(Portrait of Ruin)