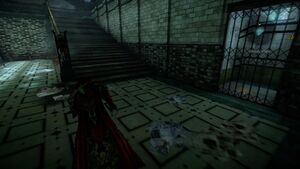 The Victory Plaza is an open, urban public area within Castlevania City. It houses the military building where Nergal Meslamstea resides, as well as a rundown hotel that hides a small lab where Bioquimek Scientists keep the antidote that cures the virus infecting Possessed Citizens.

Retrieved from "https://castlevania.fandom.com/wiki/Victory_Plaza?oldid=267699"
Community content is available under CC-BY-SA unless otherwise noted.