Not to be confused with Akumajō Dracula: The Arcade. 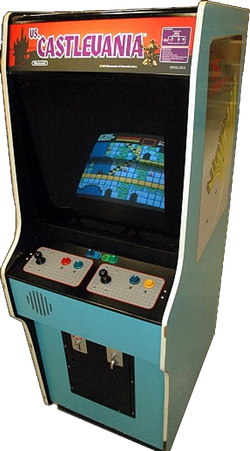 A video arcade (also known as an amusement arcade in the United Kingdom) is an establishment or similar locale that features several games where people can go play them for a fee. Each game is usually provided in its own, standalone cabinet.

Video arcades typically have subdued lighting to inhibit glare and enhance the viewing of the game's video display. This atmosphere has added to the stores' sometimes negative reputation in the United States, as well as in other countries. In Japan, however, male and female teens and adults can often be found enjoying arcades, typically on dates.

Traditionally, customers of these establishments were overwhelmingly teen males. However presently families are the largest arcade constituent, mainly because the lack of standard new games being released in arcades (arcades now are comprised mostly of deluxe games which are more popular with families).

With the increase of Internet cafes opening (which also provide gaming services), the need for video arcades and such arcade games are reduced, and many have been shut down or merged with the cafes as a result.

The video games are typically in arcade cabinets. The most common kind are uprights, tall boxes with a monitor and controls in front. Customers insert coins or tokens into the machines (or use magnetic cards) and stand in front of them to play the game. These traditionally were the most popular arcade format, although presently American arcades make much more money off deluxe driving games and ticket redemption games. Japanese arcades, while also heavily featuring deluxe games, continue to do well with traditional JAMMA arcade video games.

Castlevania games available on the systemEdit

Retrieved from "https://castlevania.fandom.com/wiki/Video_arcade?oldid=281131"
Community content is available under CC-BY-SA unless otherwise noted.