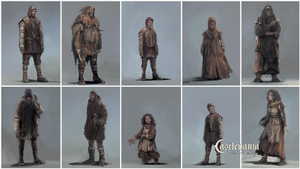 Villagers are characters frequently present in the Castlevania series; they inhabit the many towns and cities found throughout the vast Transylvanian realm.

Either appearing only by mention or actively taking part in the hero's journey, these individuals often offer clues or are merchants who will sell weapons and other mystical items. Some of them, however, may also be town pranksters who will give false information if talked to.[1] Yet, in some rare instances, villagers will actually help the hero while in combat, providing supporting offensive power.

Villagers' most prominent appearances have been in games like Castlevania II: Simon's Quest and Order of Ecclesia, where in the latter they acted as quest-givers, presenting Shanoa with numerous quests and rewarding her accordingly for each one successfully completed. They also made a brief appearance in the introductory stage of Lords of Shadow by helping Gabriel against a horde of Lycathropes and a Great Warg which were terrorizing their village.

It should not come as a surprise the appearance of villagers in the series, as they are generally Dracula's first victims every time he comes back to the world of the living. Either by razing the nearby towns surrounding the castle, poisoning their sources of water, killing them in large numbers and turning them into legions of zombies, abducting groups to keep them prisoners in the dungeons and later serve as sustenance for the vampire population, be fed to Dracula's monstrous pets, practice unholy experiments with them, or forcing them to fight for their lives at the castle's arena, villagers surely don't have it easy when the Dark Lord returns from the dead.

Some more "lucky" villagers end up being given the "dark gift", as seen in Castlevania (N64) and Legacy of Darkness. It's not clear why certain individuals are chosen over others for this special treatment, but perhaps they satisfy some specific requirements or simply happened to fall prey to another vampire. Yet, in some occasions, a vampire will deliberately infect someone cherished by their enemies, all while enjoying their futile attempts trying to save their life. The least affected ones only end up slightly afflicted by the curse which befalls the land every time Dracula is resurrected.

In one of Rondo of Blood's introductory cutscenes, the town of Aljiba is actually shown being rampaged by Dracula's forces, where we can see how Annette is kidnapped while trying to escape. One of the optional objectives in the game then becomes finding and rescuing four kidnapped maidens along the various stages of the game, one of them being Maria Renard, who once rescued can be selected as a playable character. This game's 2007 revision, Dracula X Chronicles, elaborated a bit further on this premise, granting the heroes with special items for each maiden rescued, which in turn gave them the means necessary to unlock many alternate paths throughout their journey.

First prominent appearance of villagers in the series. The player starts the game in the town of Jova, with many of its inhabitants pacing back and forth in front of their houses and the church. Being that Simon's Quest adopts a gameplay style more reminiscent of a role playing game adventure, these individuals can be talked to in the hope of them sharing a secret or selling items to the player.

In most towns, Simon will find a church. Inside, the town's priest will offer him to rest there for a while. Doing so will replenish all of Simon's health to continue on with his holy battle.

In the towns of Aljiba and Aldra, Simon will encounter two crystal traders who will exchange their own crystals for Simon's current one. The one in Aljiba will give him a blue crystal in exchange of his white one, and the one in Aldra will give him a red crystal for his blue one.

When the sun sets behind the Transylvanian mountains while in a town, all townsfolk will scatter for the safety of their homes and lock themselves inside, waiting for the morning sun to vanquish the horrible night while creatures of all shapes, sizes and hairiness roam the darkness.[2] Once the night is over, however, they'll come back out and continue providing clues and services as usual.

Crystal Trader
Add a photo to this gallery

One of the main objectives in Rondo of Blood is to rescue four maidens who were abducted when Dracula's forces rampaged their hometowns. Doing so is the only way of obtaining the best ending in the game. One of these villagers is Maria Renard, a little girl whose inner powers started to manifest once she sensed Dracula's own powers. The foe, however, is aware of this predicament and orders his minions to capture her. Richter finds her midway through Stage 2, where he encounters the dark priest Shaft practicing some sort of sorcery on her, with the purpose of stealing her powers.

Once rescued, Maria becomes a playable character, and a valuable one that is, as she has better speed than Richter, can attack twice in a row and while walking, is smaller and can fit through narrow spaces, has the ability to double jump and slide, and her sub-weaponry comes in the form of the "Four Symbols" from Chinese mythology, which are four pet animals with great magical powers; not to mention Maria's own dark alter-ego manifestation: the Guardian Knuckle.

The other three kidnapped maidens are:

Iris
Add a photo to this gallery

In Dracula X, the roster of kidnapped girls is reduced to only two: Maria and Annet. Unlike in Rondo of Blood, which was the inspiration for this game, both girls are now sisters. This time around, both only play the part of "damsels in distress", which means that Maria won't become a playable character once she's been rescued; and saving either one, both or none of them will only change the background image while the credits roll at the end of the game. 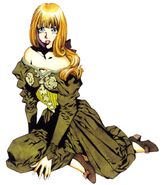 Maria
Add a photo to this gallery

In Reinhardt's and Carrie's storylines, they soon come across the corpse of a man and the skeletal remains of some other villagers. After paying their respects and while preparing to head on their way, these suddenly come back to life and ambush them. A myriad of skeletons will then infinitely keep digging their way out from the earth and pursue the heroes in various levels throughout the game, especially when they pass through a graveyard in the Forest of Silence.

Once the player reaches the Villa, and while attempting to reach the second floor, they'll be attacked by a vampire who appears to have been recently turned, as he keeps on wearing typical villager's clothing. After dealing with him and in a room on the second floor of this mansion, a villager suddenly enters pleading for help; however, not everything is as it seems. He tries to persuade the heroes into saving themselves and flee from that hellish place. While this happens, a rose's petal falls from a flower vase lying in front of a big mirror. The hero then catches a glimpse of the entire room through its reflection and discovers that the villager projects no image in it. The man, noticing this and knowing his plan has been thwarted, reveals his true nature: another vampire!

Not long after this encounter, they reach a flower garden where a polite village girl named Rosa comes to attend the roses... watering them with blood. She reveals herself as yet another vampire but does not attack the heroes and instead offers them help. After advising them of the dangers lurking around them, she then vanishes into thin air.

Soon after entering the mansion's gardens, they encounter a little child who goes by the name of Malus. He explains that the monsters burned the village, his home, and that both of his parents were murdered in the attack. He also tells them that they took all of the village's children to the castle and that the "devil in the black cloak" was looking for a certain child. Not being able to remember anything more, both are then attacked by a pair of Stone Dogs. A chase through the maze garden then ensues. After outrunning the beasts, the protagonist sends Malus to safety through the nearby forest while they remain in the mansion. However, this is not the last we'll be seeing of this little child...

The corpses of some other villagers can also be found in other parts of the game, like the body of a man lying besides the shore of a poisoned water channel in the Tunnel. 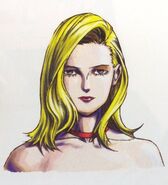 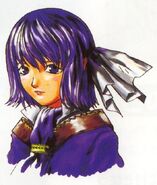 This villager turns into a vampire after he attempts to deceive the hero.
Add a photo to this gallery

Exclusive to Legacy of Darkness, saving the village's children Malus mentioned earlier is the main objective in Henry's quest. His adventure ends when all six of them have been rescued and put to safety. They are:

Anthony
(found in the Forest of Silence)

Bess
(found in the Castle Wall)

Clark
(found in the Villa)

Diana
(found in the Tunnel)

Edward
(found in the Underground Waterway)

While the role of the kidnapped village girls essentially hasn't changed from their portrayal in Rondo of Blood (Maria Renard being a playable character, and Annette being a requirement in order to achieve the true ending), this time Tera and Iris play a much important part in the game. When rescued, Tera will give the hero the "Tera's Charm", a necklace with the power to destroy Red Skeletons permanently, consequentially allowing them to destroy walls made with the bones of these foul creatures and giving them access to hidden items and secret paths. Iris, on her part, will present the hero with the "Iris's Charm", another necklace which endows the ability to destroy crystal barriers.

In Stage 7, the game will try to trick the player, newcomers and veterans alike, into trying to save Annette by opening the door of what was her cell in the original game. If falling for this ruse, the hero will find Laura in her place, thus having to fight her instead and wasting their key. If the player, on the other hand, refrains from opening that door and instead climbs up some sets of stairs, they will find a floor-switch behind a crystal wall (Iris's Charm required). Stepping on it will open a passage below where the real Annette can be found.

Iris
Add a photo to this gallery

Visiting Wygol Village for the first time allows Shanoa to have a conversation with the village founder, Father Nikolai. He will then give her the task of finding and rescuing the other twelve missing villagers who are being held captive by releasing them from their Torpor prisons. Rescuing them allows Shanoa to receive additional quests, and as a consequence, better equipment. Furthermore, if all thirteen villagers have been rescued prior to the events of the Mystery Manor, Shanoa can access Dracula's Castle and be able to obtain the good ending of the game. 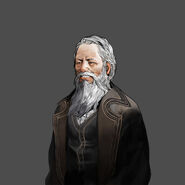 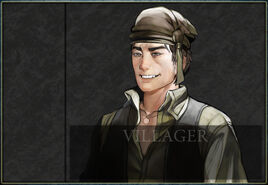 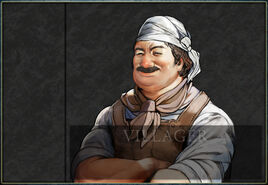 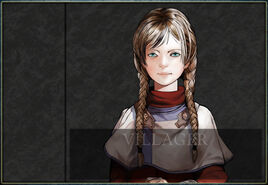 Anna
A girl (daughter of Irina). 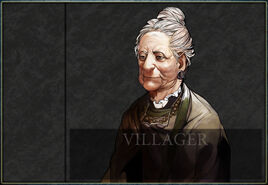 Daniela
An old woman with memories of fighting monsters with her grandfather. 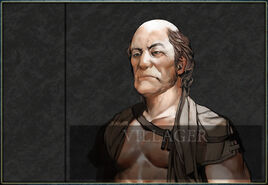 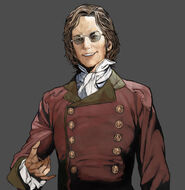 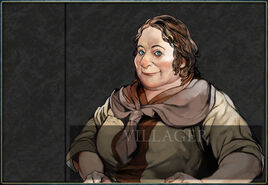 Irina
A baker and mother of Anna and Serge. 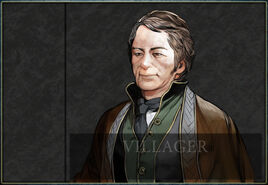 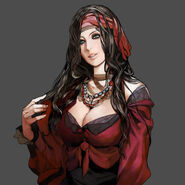 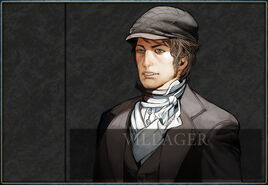 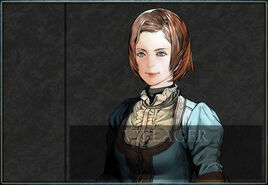 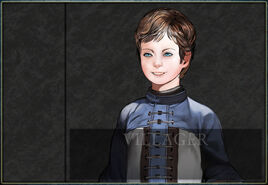 Serge
A boy (son of Irina).
Add a photo to this gallery

A group of villagers make a brief appearance in the introductory stage of Lords of Shadow, by helping Gabriel against a horde of Lycathropes and a Great Warg who are terrorizing their village.

Retrieved from "https://castlevania.fandom.com/wiki/Villager?oldid=278786"
Community content is available under CC-BY-SA unless otherwise noted.