For other uses, see Dracula (disambiguation).

Vlad III of Wallachia, commonly known as Vlad Țepeș and Vlad the Impaler, was a 15th Century voivode (prince) of Wallachia (in modern-day Romania) who lived from 1428/31 to 1476/77 and reigned from 1448 to 1476 (except the years when he was imprisoned). He was also known as Vlad Drăculea. Drăculea is a diminutive form of his father's nickname "Dracul" (from his membership of the Order of the Dragon, Dracul meaning "Dragon" and "Devil" in Romanian). This word became Anglicized to "Dracula" and Bram Stoker used this form as the eponymous title for his 1897 novel and its main antagonist, Count Dracula.

In the Castlevania series

In Romanian, Vlad the Impaler is translated to Vlad Ţepeş, and some Castlevania games give Dracula's full name as Dracula Vlad Ţepeş (or variations thereupon), implying a link between the two. However, in Castlevania: Lament of Innocence Dracula was identified as Mathias Cronqvist, a fictional 11th Century crusader who lived 400 years before Vlad the Impaler. Because of this, the position (and existence) of Vlad in the Castlevania continuity is unclear. Presumably, in the 15th Century, Mathias changed his name to Vlad Ţepeş and committed the atrocities which, in time, would become associated with the historical character. It is also possible that Mathias simply liked the surname of "Dracula", and adopted it at some point after Lisa was killed. Dracula originally meant "son of the dragon", but in time it would come to mean "son of the devil", a name Mathias would naturally be attracted to.

More interesting information is the existence of Matthias Corvinus of Hungary, a man who took Vlad as vassal during a few years because he was married to his cousin, Ilona Szilagyi. His name resembles Mathias Cronqvist, the man who would become Dracula in Castlevania: Lament of Innocence. It is said that Matthias Corvinus, after a request from Christian rulers, was obliged to imprison Vlad during 12 years. The fictional character Mathias Cronqvist's name would be created from Corvinus'. Another speculation would be the imprisonment: Joachim Armster is imprisoned by Walter Bernhard in his castle. 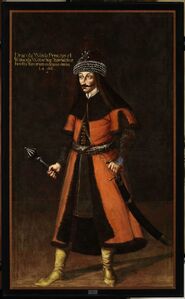 The Power of Sire's splash in Castlevania: Symphony of the Night is a multi-colored version of Vlad the Impaler's portrait.
Add a photo to this gallery
Retrieved from "https://castlevania.fandom.com/wiki/Vlad_the_Impaler?oldid=277175"
Community content is available under CC-BY-SA unless otherwise noted.