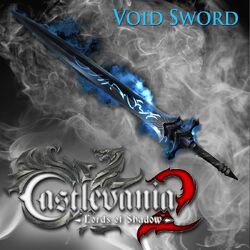 Pain and suffering have tormented Gabriel over the centuries following his transformation into the Prince of Darkness, beating his exhausted mind again and again. As his memories submerged into the waters of oblivion, Dracula abandoned his humanity behind to overcome the pain and suffering, and filled his heart with a cold, dark void. That feeling gave rise to the Void Sword, capable of draining both the nightmares of its owner and the life of everyone that comes in contact with its blade.

The formation of the Void Sword caused impurities that penetrated the deep rock of the Castle. These crystal fragments have kept the secret of ice for centuries while driving the Castle residents mad with its tempting call. He who can control the power held by one of these crystals will be capable of extending the void energy beyond the sword's edge.

Between Lords of Shadow and Mirror of Fate

After defeating the Forgotten One, Gabriel Belmont renounced his old identity and with it, his former weapons and powers. In order to overcome his nightmares and suffering, Dracula filled his heart with an empty void that manifested in magical Void powers, emulating his former Light Magic and allowing him to materialize a powerful longsword.

The formation of the sword generated crystal impurities in the foundation of the Castle which resonated with ice magic while serving as a maddening lure to its inhabitants.[2] This lure was even strong enough to entrap the Navigator, a being from another plane, which fed on the void energy until its being was stretched across time and space, transforming it into a multi-present being that exchanged its transportation services for further energy.[3]

Dracula wields the Void Sword, alongside his other signature weapons, in his battle against Trevor. Dracula defeats the interloper despite Trevor's attempts to counter the Void Sword with his Shadow Magic, before discovering to his horror that the man was his son.

After Dracula entered hibernation, the Navigators that inhabited the castle starved from the lack of Void energy and perished.[3]

Under the control of the Castle, the Keeper of the Void Sword leads a squad of Dungeon Jailers and Dungeon Minions to steal the Void Sword and hide it within the Toy Maker's Guest House, in order to keep it out of Dracula's reach. On a quest to retrieve it, Alucard infiltrates the Guest House and recovers the sword from the Keeper, who he decapitates using the sword in tandem with his own blade. Afterward, he takes the Void Sword to Bernhard's Wing and lays it in the claws of the Navigator for his father to find.

While roaming the pharmaceutical corporation's factory, Trevor leads Dracula to Bernhard's Wing so that he can regain his sword and its Primordial Void Gem. In an attempt to stop him after he acquires the sword, the castle animates a Stone Golem and sends it at Dracula, but the vampire lord easily defeats the construct and recovers his Void powers as well.

From a physical standpoint, the Void Sword is a powerful longsword which Dracula can easily wield one-handed, due to his immense strength. It is somewhat weaker than the Shadow Whip and Chaos Claws, but has moderate range, and can conduct electricity in certain circumstances.

The Void Sword's primary ability allows Dracula to vampirically replenish his life energy by dealing damage to his targets, similar to Gabriel's Light Magic. Once empowered with the Primordial Void Gem, it regains the various techniques that allow Dracula to immobilize enemies or shield himself using its ice and storm powers. Mastering the Void Sword increases the strength of these techniques and the duration of freezing, as visualized in the brightening of the aura that surrounds the sword. Dracula can also combine the Void Sword's magic with his Mist Form in order to freeze any enemies his mist touches.

Void Sword from Mirror of Fate

Void Sword from Lords of Shadow 2

Power of the Void

Talk to the sword

Retrieved from "https://castlevania.fandom.com/wiki/Void_Sword?oldid=257650"
Community content is available under CC-BY-SA unless otherwise noted.