Back in the castle, follow the path and climb on the structures to reach a tower. Climb on this tower again, and you'll fall in front of a Brotherhood of Light group. Two types of new enemies appear are a part of that group: the Brotherhood Cleric and the Heavy Brotherhood Warrior.

Break the Heavy Warrior's armor with the Chaos Claws and defeat the Cleric. This enemy is using various spells to help his allies and can turn the side of the battle in no time if you don't deal with him right away. Once they're all dead, activate the mechanism and climb in the castle. You'll find Trevor in a circular chamber where he is playing with figurines resembling key people in Dracula's life.

Follow the path after the cutscene. Another group will attack you on the bridge. Defeat them and head ahead to reach the Greenhouse.

Descend the path to reach Agreus's gardens. This section can be very easy or your worst nightmare... You must get to a switch at the end of the garden, that will open a gate, and then reach this open gate.

A few tips before heading in the garden: Agreus will detect you if you walk in the dead leaves. Watch the map to know where he is. However, using the ledges or the Form of Mist will allow you to pass undetected (even in front of Agreus). Jumping will also help you stay undetected.

You can also use the bells, with a shadow dagger, to fool Agreus. If he hears a bell, he will rush to that point. Note that Agreus won't fall for it twice...

A strategy that works quite well is to move on the right and to lure Agreus to the left (with the far away bell). Then, rush (jumping, mist, grabbing ledges) through the gardens and try to reach the switch. Use the mist whenever Agreus comes near to hide. Note that pushing the button will make Agreus rush to its location: quickly hide and use the form of mist to pass the gate undetected.

If you Agreus finds you, you will have to start again, but if you pushed the button, the gate will stay open. Once you are done with this section, take the elevator, heal and restore your magic, and get to the arena ahead.

Before the battle, you'll have to freeze Agreus' bird to get the piece of the Mirror. Agreus will then arrive and confront you.

Agreus is very fast and agile, but not very resistant. He can use a large swipe with his fork (blockable, you can see him turning his weapon before attacking), or a big crush with a shock wave (unblockable, and sometimes twice in a row). Agreus is can also charge you, or launch his fork to impale you (twice in a row). If this happens, quickly escape or you'll get another free hit.

The best way to damage him is too block and counter his attacks: use the Chaos Claws for maximum damages.

At some point, Agreus will change his fork into two scythes. He can send them, or project energy: jump over the first, dodge (right, then left) the second. Keep blocking his attacks and counter whenever you can. Patience is the key with Agreus. He may be agile, but his health is low.

After the fight, go back to Trevor, and enter the next corridor.

Play the mini-game during the transition: launch projectiles/shadow daggers on the puppets that appear to get 150 XP. Once done, follow the path and confront the group of Brotherhood soldiers. After the battle, use the red column to create a passage to the Puppet Theatre.

In the Theatre, fight the Brotherhood soldiers, and climb to reach the main room. You can destroy the seats to get more XP. You must climb on the wall to the right of the stage to reach a black gate. Morph into a rat and exit to the main room. There, get to the left of the stage and enter the little hole beneath. Then you must transform again into Dracula to power-up the machine with a Fire Bomb (note: use the statue to re-fill your magic).

Transform back into a rat and exit the room. You must avoid the gears and machines to exit. One rat will be sacrificed when you chew the rope to stop the last gear. Get back to the first black gate and morph back into Dracula. Go back to the stage, activate the lever, and get to the central machine after the cutscene.

You must play the Toy Maker's story, so listen to the puppet's speech. You must place the following puppets and accessories:

Once the little scene is finished, grab the heart in the hand of the child puppet. 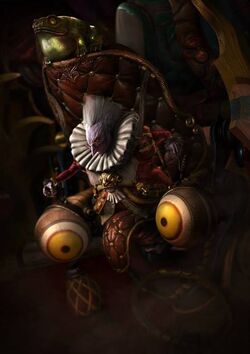 The Toy Maker first summons the Toy Knight to fight you. This first enemy has two different attacks with his spear: an horizontal swipe and a vertical one. Dodge them and counter-attack. It can also jump and fall on the ground, with a small shock wave. Jump or run away. No real strategy here, keep attacking it to quickly end the first phase.

The real enemy, the Toy Puppet, appears. Use your Chaos Claws to inflict damage to its helmet, or even break it. Be careful, it attacks with its arms and can catch you for extra damage. Try to block a small attack to counter and inflict a lot of damage to its head.

The Toy Maker then makes the Toy Dragon appear. This new enemy can shoot projectiles from his mouth (a fire breath and some small projectiles/gears): jump over them to avoid damage, or dodge away. It can also turn around a give a tail attack, which is unblockable. Jump or dodge once again. Pretty much like for the Toy Knight, keep attacking it to end this phase. You can also freeze it to slow it down. Finish it by launching a fire bomb into its mouth when asked to.

The Toy Puppet reappears once again: keep mashing its helmet to open it. It now has a new attack: it can make some smoke explosions. Try to stay in the air to avoid taking damage. Once the helmet is broken, this battle is almost over: launch a projectile (fire or ice) to make the Toy Maker fall on the ground, and go for massive damage. If it goes up again, launch another projectile to stop it again.

When the battle ends, he gives you the second piece of the Mirror of Fate. Exit the Theatre, and go back to Trevor. You are sent back to the city once again.

Retrieved from "https://castlevania.fandom.com/wiki/Walkthrough:Lords_of_Shadow_2/Agreus_%26_Toy_Maker?oldid=235142"
Community content is available under CC-BY-SA unless otherwise noted.