Entering the City of the DamnedEdit

Upon first arriving in the Castle, you can turn around to see a chain across a chasm: once you have your Chaos powers, you can come back later to break the chain and collect a Pain Box on the other side of the Chasm. In order to enter the City of the Damned, you'll have to follow the path to an elevator: go to the first switch on the left and pull the lever to activate the elevator and be taken to the City of the Damned.

After the cutscene where you meet Stheno, you'll want to immediately walk to the cliff below you to collect a Pain Box. Once that is done, enter the pathway behind you where you'll encounter a possessed Dungeon Jailer and large amounts of Dungeon Minions. Be careful with the Jailers: they are armored brutes, and you don't yet have the ability to break it yet, so you'll have to attack them by behind. A good tactic to use is somersault behind them and counterattack with the somersault whip/sword skill.

The jailers can be used against the Minions, they care little for their subordinate's safety and will just as soon attack them should they get in between you and the jailer, or even throw them at you in a unblock-able attack. The Jailers are easy enemies to take down when done correctly, one of their unblock-able attacks involves charging at you head on, dodge them to lodge them in a wall where they will be vulnerable to attack.

If you run low on health, then it may prove wise to focus your efforts on the minions instead of the jailer; until he is defeated, he will call forth endless waves of the weaker enemies providing you with a limitless source of blood to feed on, or a alternate target for your Void Sword. If the minions begin to overwhelm you, either freeze a couple of them with void projections or use the Bat Swarm. Once defeated, the Jailer will surrender a Dungeon Key to you before he is executed that you will need to unlock the door out.

However, you won't want to leave immediately, there is another door in the room that you'll have to offer your blood to open: behind it is the corpse of a brotherhood soldier with a diary page. However, in order to proceed further you'll need the Demonic Wings. Instead exit through another blood offering and follow the path to a broken balance beam to a Wolf Altar. You'll want to climb the cliff-side to a dungeon gate, for which you'll need a dungeon key to unlock.

Also if you're running low on Void magic, you can use the altar to return to the present and absorb magic from a Magic Font to restock your supply. Return to the beam and take a right to a large chain based puzzle. As you climb the chain, it will begin moving down against you: jump and grab onto the nearby support beam until the chain stops, simply repeat until you reach the top at which point you'll be able to jump from chain to chain until you reach the other-side.

After talking to Euryale, you'll come to a large pit: jump to the left ledge to collect a Pain Box. Jumping down into the pit and you'll encounter a group of armored Dungeon Minions. Since you can't break their armor (yet), you'll have to stun them with a block and then attack them with a series of counter attacks. They'll also make use of a poison fog, you'll definitely want to avoid that. If you have the somersault ability, be sure to use it to unleash devastating attacks. Another effective tactic is to use a Stolas' Clock to keep the minions in a stun lock while you attack them, making them easy prey. You can also freeze them with Void Projections to make them vulnerable to attack without having to worry about their armor.

Once the group is defeated, you'll get your first Seal of Alastor (a relic that temporarily unlocks all of the move sets for all of your weapons as well as increase the weapons' mastery level by one). In order to escape the pit, climb out using the broken restraints on the far wall. Once out, you'll be able to see another Brotherhood corpse with a scroll and an altar on the cliff.

Finally, extend the bridge left once and once back from the third altar to take the Chupacabras to the seal breaker and free him. He will open the door next to the switch that was used to lower the cage. From now, the Chupacabras' Shop will be open for your use, where you'll be able to buy Relics and other items to help you on your quest. With the door open, you'll have to offer blood to start the mechanism inside. Simply walk across the bridge to continue.

One of the first things you'll see when you're walking down the path is a massive facility suspended by chains, the Gorgon's Lair. You'll be immediately swarmed by a group of Harpies. You'll want to use areal attacks and the Shadow Daggers to dispatch the bird like creatures, or if you prefer a ground battle use the Void Sword's freeze attacks to knock the Harpies to the ground, it's important to watch out for their dive bomb attacks.

Once the Harpies are defeated you'll need to make your way to Medusa's lair by climbing a nearby support beam that has a chain/bridge connected to it. At the top of the beam you'll find a Brotherhood corpse with a Diary page, simply cross the bridge to get to Medusa's lair. Unfortunately once on the other-side you'll be attacked by another group of Harpies, they'll be easy enough to defeat.

You'll probably spot a Pain Box on the wall across from the bridge, however you won't be able to get it right now without your Demonic wings. Looking to the left you'll see a broken support column, jump onto it and begin making your way around the walls to the prison gates. There you'll be ambushed by two Jailers, remember that their attacks are just as effective against each other as they are against you. When one of the Jailers lights his hammer on fire, use a void projection to put it out. Otherwise, all attacks will be unblockable.

But defeating them will reward you with a gate key for each one, you'll need to use one on the gate to unlock it. Briefly detour right to collect the Pain Box from earlier. Entering the building you'll find a mechanism in the center of the room, activate three times to unlock a set of stairs to your right, be careful of the fiery torches on both sides of the switch as they will do minor damage to you.

Once in the underground you must be careful not to immediately trigger the cut-scene by taking the right path in order to collect a diary page, if you go left and into the hole in the wall you will drop down next to a Dungeon Key shrine. 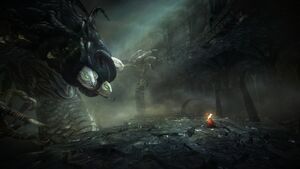 Use your newly acquired Chaos Claws to destroy the Gorgon's rock barrier. Then, attack its head(s) with your weapons. If you run out of magic, destroy the tentacles that appear at the front of the battlefield.

The Titan won't let you kill her easily -- she can use two different attacks during this first phase:

After several hits, the Gorgon will crush her fist in the ground: freeze it with a Void Sword projectile (a short animation will show you). Then, climb on her arm, but be careful: quickly jump forward and back on her scales to avoid her claws. Once you get to the head, jump on it to destroy it. You'll get back on the ground after that.

Now, the Gorgon can use her "stone gaze" attack: never stay too long in the green circle that appears on the ground. Repeat the first phase until she crushes her fist in the ground once again. Freeze it again, but before climbing the arm, you must destroy the rocks that prevent you to do so. Her second head will hide when you approach her, so wait (and avoid her claws) until it comes out to jump on it.

The final head remains: wait for the Gorgon to prepare her fire breath attack and quickly throw an ice projectile into her mouth to finish the battle. Once the cutscene, and this epic battle, are over, take the Chaos Primordial Gem to get the Chaos Bombs. Escape the Gorgon's Lair by climbing her arm, and using your new fire bombs.

Retrieved from "https://castlevania.fandom.com/wiki/Walkthrough:Lords_of_Shadow_2/Gorgon?oldid=189777"
Community content is available under CC-BY-SA unless otherwise noted.