After the first cutscene, a "How-to guide" to the controls of the game begins. To proceed, Dracula must: move, jump, move the camera around and use both area and direct attacks.

Next, a group of four Brotherhood Soldiers will invade, in order to defeat the first group Dracula will have to learn the basics of blocking, counter attacking, dodging unblockable attacks, recovery, blood sucking and Shadow Whip combat.

After beating all the soldiers, go through the corridor by climbing the column on the left and jump over the pit (QTE). Keep going, and get back on the ground. Walk towards the door to launch a cut-scene.

The Paladin will fight you with 2 different patterns: one of two short attacks (block-able), and one of either one or two unblockable rushes. Try to block the first and unleash a powerful counter-attack. Dodge the second attack. If you stay too long near him, the Paladin will push you with a non-damaging move. He can also attack at distance with an energy blast: you must avoid it, as it is unblock-able (like all energy attacks).

Your magic power is unlimited, so be sure to use your Void Sword to regain life, or your Chaos Claws to wins this battle even quicker. After a few hits, he will fly away, and a cut-scene will play. 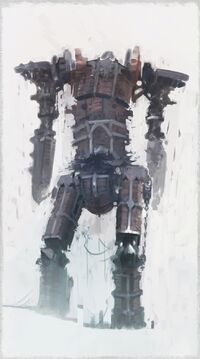 A few soldiers will appear on the arm of the Titan. When the Paladin says "Break the castle!", be ready to jump before the impact against the wall (or you'll take damage). After a short time, all soldiers will fall and you'll have to climb on the Titan. It will crash his fist against the castle 4 times, and you'll have to complete a QTE each time.

If you fail, you'll get back on the balcony. Just wait for the Titan to crush this claws on the edge to jump on back on it. You'll then have to do the remaining quick-time-events.

Once you can climb up, avoid the arrow launched by the Paladin. Break the two pins by luring the Paladin in shooting arrows on them (a little cutscene will show you how to do so). When the three pins are destroyed, keep climbing, but avoid getting hit by the spinning gears (or you'll have to start this section again).

Keep climbing until you get to a section with soldiers. You need to lure the Paladin again so he destroys the three pins on the ground. Avoid and kill the soldiers that attack you. Once the three pins are destroyed, press "Grab" to remove the metal panel, and jump on the ladder.

Keep jumping straight on, but wait for the good opportunity, or you'll get hit by the spinning gears. The same goes for the Paladin's arrows. You will have to get down a little before reaching the head of the Titan.

The final section of the Titan is the same than before: you need to destroy all three pins on the ground. Be careful, as all enemies here have shields, and can cause trouble on higher difficulties. Once the three pins are out, press "Grab" and watch the cutscene. 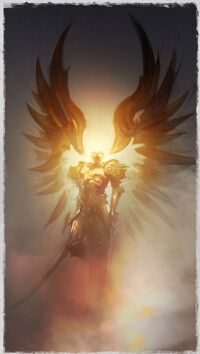 It's time for a final clash with Roland de Ronceval!

This battle is divided in two phases:

Wait for Phase 1 to start again (it occurs randomly) to attack the Paladin, because he's very dangerous in phase 2. Repeat until the cutscene showcasing the Great Explosion plays.

Retrieved from "https://castlevania.fandom.com/wiki/Walkthrough:Lords_of_Shadow_2/Siege?oldid=211413"
Community content is available under CC-BY-SA unless otherwise noted.