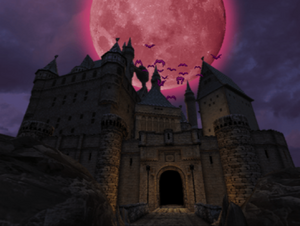 Walter's Castle is the main scenario where the events of Castlevania: Lament of Innocence take place. It homes five primary areas, with one final area where its vampire lord owner, Walter Bernhard, awaits any adventurers who dare to challenge him.

This edification marks the place of Dracula's ascension to power, gaining the title of Dark Lord by ultimately succeeding in the creation of the legendary Crimson Stone, and also the place where the Belmont family made an oath to stop him, even if it took an eternity to do so.

An ancient castle that was located somewhere in Europe in 1094, among the Forest of Eternal Night. The building was ruled by the ruthless vampire lord, Walter Bernhard, who used it as a playfield in his wicked games of attracting adventurers who wished to challenge him.

It was in this castle where Mathias Cronqvist, a prominent war strategist and friend to the House of Belmont, consummated an ingenious and complex plan he started to devise after his wife's death. Now turned into a vampire, he managed to succeed in trapping Walter's soul and gain with this all of his powers, in addition of gaining complete allegiance from Death himself for achieving to create and possess the fabled Crimson Stone.

It is possible this castle eventually became Dracula's Castle, as it has the familiar strange keep structure. If this is the case, then Dracula's Castle dates back to at least the 11th century. In 1094, the castle appeared more like a traditional medieval castle than the more elaborate Gothic architecture seen elsewhere. One factor in favor for Walter's castle being Castlevania is that, in Curse of Darkness, the abandoned castle is the place where only a Belmont's blood can gain access to the infinite corridor. Seeing as Leon Belmont was the first Belmont proclaimed at Walter's castle, the abandoned castle could be Walter's original castle.

A factor against the theory of Walter's castle becoming Castlevania is that at the end of Lament of Innocence, Mathias Cronqvist (Dracula) leaves the castle in the form of a bat and it is not known where he went, or if he ever returned. The Japanese instruction booklet for Castlevania: The Adventure states Dracula himself built his castle at the outskirts of Transylvania.[1] Koji Igarashi has also expressed that one of the reasons for the change of the franchise's Japanese title from "Akumajō Dracula" to "Castlevania" was due to there being no Dracula, nor his castle, on a given game, indicating that the castle seen in Lament of Innocence might indeed not be the same castle that Dracula uses later down the chronology. In addition, in the Japanese dialogue for Castlevania: Dawn of Sorrow, Genya Arikado mentions that Celia was planning to turn their headquarters into a Demon Castle by opening a gate to the Demon Realm,[2] mirroring Dracula's actions in Dracula's Curse.

So, while it's outright stated that Dracula made his own castle, when and how he turned it into a Demon Castle is only implied through Dracula's Curse (which is appropriately called "Legend of the Demon Castle" in Japan) and Dawn of Sorrow. As such, Walter's Castle couldn't be Dracula's castle since it's not a Demon Castle; thus, it does not possess reviving powers in order to "later revive" for Dracula to dwell in (beyond the fact that the castle itself is never called a "demon castle" in Lament of Innocence).

Retrieved from "https://castlevania.fandom.com/wiki/Walter%27s_Castle?oldid=250963"
Community content is available under CC-BY-SA unless otherwise noted.