View source
watch 02:05
Wiki Targeted (Games)
Do you like this video?
Play Sound

Warp Rooms are generally colored in yellow or blue on the map to differentiate them from Save Rooms (red) and from the rest of the areas of the level. The player cannot teleport to a warp room in an area they haven't previously been to, although there are some exceptions, usually when the first warp room of the game is reached, which will often transport the player to another warp room near the beginning of the game where the shops can be accessed, or to an all new area in order to advance through the game's storyline. Inside these rooms lies some sort of portal or device, which is usually activated by pressing ↑ on the control pad while standing in front of it. Just by entering a warp room will unlock it as a possible warp destination, it's not necessary to activate the device inside (the same applies for Curse of Darkness; the player doesn't need to sit in the Teleporter Seat, only by entering the room will unlock it).

These locations became common areas in the Castlevania series since the release of Castlevania: Symphony of the Night in 1997, which introduced new exploring and gameplay elements inspired by Nintendo's Metroid series, commonly referred to as "metroidvanias" ever since. As such, these locations allow the player to minimize backtracking in the big and lengthy areas that are connected within a game. Enemies cannot appear inside a warp room.

In the first games where this mechanic was implemented (Symphony of the Night, Circle of the Moon and Harmony of Dissonance), the player would be taken to the next already unlocked warp room in the castle, usually arranged in a counterclockwise direction if looked through the map. In Aria of Sorrow, a map would come up after activating the device and the player would then be allowed to choose their desired destination by using the control pad. With the availability of the touch screen in the Nintendo DS trilogy (Dawn of Sorrow, Portrait of Ruin and Order of Ecclesia), players could do both, choose their destination with the control pad or simply touch the warp room they wanted to teleport to on the screen.

In Castlevania: Lords of Shadow 2, Dracula uses Map Rooms and Wolf Altars to navigate through his castle and the city. In the DLC Revelations, Alucard uses Teleporters to do so.

In the Castlevania animated series, Dracula's Castle features warp mirrors similar to the warp rooms found in the games, although they can transport an individual to different places around the world and not just within the castle.

Symphony of the Night is known for introducing several new gameplay mechanics into the series, and among them was the usage of Teleport Rooms. Each of these rooms features a particular statue that hints on the area it represents. Their imagery seems to come from a combination between both the western and Chinese zodiac. The lion may represent Leo, the scorpion, Scorpio, and the twin human and fish statues that appear around the portals probably represent Gemini and Pisces, respectively. The snake, horse and goat (and tiger in the Saturn version) are entities present in the Chinese zodiac. 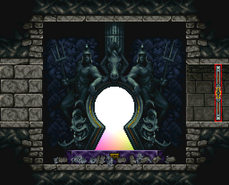 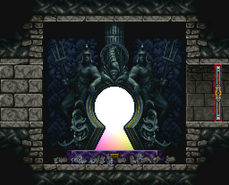 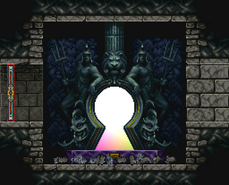 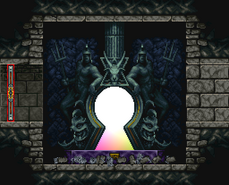 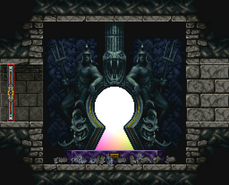 Abandoned Pit to the Catacomb
(Cave) 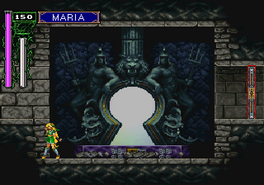 Unlike previous titles, to teleport between Warp Zones in Harmony of Dissonance the player is required to press ↓ on the control pad instead of ↑, as doing the latter will make them enter the other castle instead.

Lament of Innocence takes a different approach regarding warp rooms compared to the rest of the games in the series: instead of featuring special rooms where the player can teleport to different locations within the castle, they are presented from the beginning with a large hall that serves as the game's main hub and which features five teleporters, each of which that leads to one of the five initial areas of the game.

Teleport Room from Symphony of the Night. 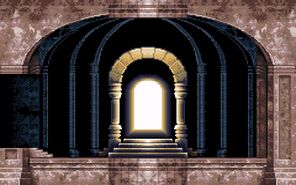 Warp Zone from Circle of the Moon. 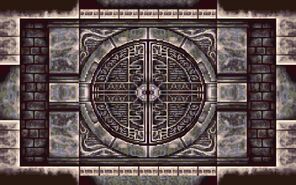 Warp Zone from Harmony of Dissonance.

Warp Room from Aria of Sorrow. 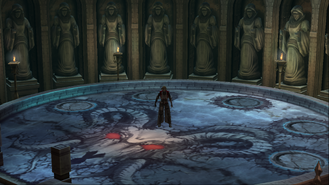 Warp Room from Lament of Innocence. 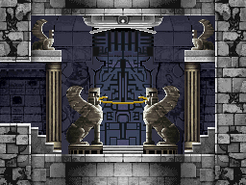 Warp Room from Dawn of Sorrow. 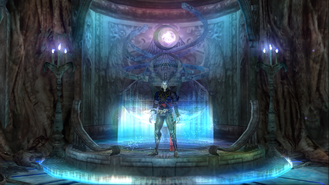 Warp Device from Curse of Darkness. 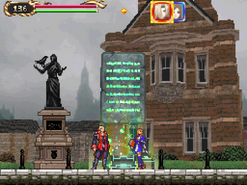 Warp Point from Portrait of Ruin.

Warp Point from Order of Ecclesia.