This creature is referred to as "Salamander" in Dracula X. For its main page, see Salamander.
For the Bloodlines item, see Water Dragon (ultimate item).

The Water Dragon, also known as Serpent or Hydra, among other names, is a recurrent boss in the Castlevania series.

The Hydra of Lerna, more often known simply as the Hydra, was a serpentine water monster in Greek and Roman mythology. Its lair was the lake of Lerna in the Argolid. In the canonical Hydra myth, the monster is killed by Heracles (Hercules), using sword and fire, as the second of his Twelve Labors.

According to Hesiod, the Hydra was the offspring of Typhon and Echidna. It possessed many heads, the exact number of which varies according to the source. Later versions of the Hydra story add a regeneration feature to the monster: for every head chopped off, the Hydra would regrow two heads.

The Hydra had poisonous breath and blood so virulent that even its scent was deadly.

Water Dragons are giant sea-dwelling dragon-like beasts. These aquatic monsters made their first appearance in Castlevania III: Dracula's Curse as the bosses of Block 6A, Causeway of Chaos. As with some other enemies in this game, both their design and attack patterns differ between the original Japanese version and the Western localization.

They reappeared later in Super Castlevania IV, where they were called the Orphic Vipers. This variant waves both of its heads continuously and each has a distinctive attack of its own: one breathes a short-ranged flame and the other spews three-directional fireballs. Although referred to as two different monsters in the Western localization of Super Castlevania IV (probably referencing the dragons from Dracula's Curse), in the Japanese version it is called Twin Head Dragon, confirming that it is in fact a single creature with two heads.

A single-headed aquatic Serpent appears as the harder alternative to the boss of the first stage in Castlevania: Rondo of Blood. In the remake, The Dracula X Chronicles, it largely reprises its role from the original, although another variant called the Hydra is present as the boss of Stage 5'.

The Serpent that originally appeared in Rondo of Blood returned in the game's reimagined Super NES version, Castlevania: Dracula X, where it went through a slight redesign, now looking more dragon-like and portraying a more accentuated reddish skin rather than flesh-like, as in the original game. It basically follows the same attack patterns as its predecessor, although with some slight variations. However, its most prominent distinction is that it was renamed Salamander, thus changing its origin to the legendary fire-dwelling reptile rather than a sea creature.

A version of this creature with arms appears as the first boss of Castlevania: Legacy of Darkness, actually being the responsible for sinking the ship Cornell was traveling on. This Water Dragon also makes an appearance in Akumajō Dracula: The Arcade.

An icy water dragon called Rahab first appeared in Kid Dracula. It was later mentioned in Castlevania: Symphony of the Night, where the Icebrand sword was referred to as "Rahab's Sword" in Japan. The sword was also called by this name in Castlevania: Aria of Sorrow and Castlevania: Portrait of Ruin. This great aquatic beast made its second boss appearance as a more fish-like creature in Castlevania: Dawn of Sorrow. Some of its attacks would cause a brittle ice bridge over the surface from which one could step on and fight back at the creature. 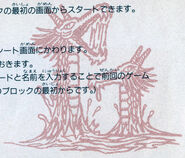 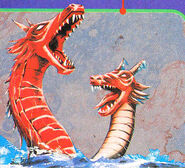 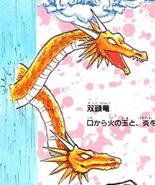 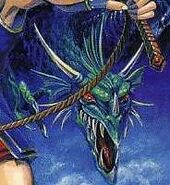 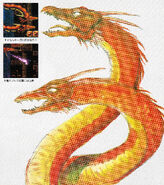 Orphic Vipers from the All About Akumajō Dracula guide for Super Castlevania IV. 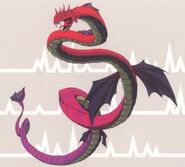 Serpent from Rondo of Blood.

The Sea Monster from Legacy of Darkness.

Hydra from the canceled Resurrection game.

Serpent DSS card from Circle of the Moon.

Serpent from The Dracula X Chronicles.

Hydra from The Dracula X Chronicles.

The Hydra as the boss in Stage 5' of The Dracula X Chronicles.

Water Dragon from The Arcade. 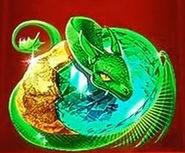 Serpent in Castlevania: Ring of the Heavens.