Water Ghosts have a more prominent role in Dracula X, being the main enemies encountered all throughout the water-themed sunken city stage. As expected, they spawn in endless numbers from the various bodies of water encountered along the level, populating the screen while the hero is usually fending off other enemies. Furthermore, they will incessantly keep harassing the player while they're riding moving platforms over bottomless pits, or while trying to outrun a flooding section at the middle of the stage, effectively setting them for potential instant deaths. 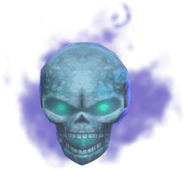 Add a photo to this gallery
Retrieved from "https://castlevania.fandom.com/wiki/Water_Ghost?oldid=208210"
Community content is available under CC-BY-SA unless otherwise noted.