For the enemy called "Werebeast" in Legacy of Darkness, see Weretiger.

Any half-man/half-beast is called a Werebeast. The most common kinds of werebeasts are the Werewolf, followed by the Minotaur (Were-Bull), which are commonly found together. Starting with Castlevania (N64), a variety of other types of werebeasts have made appearances.

The Were Bane is a weapon that is especially strong against werebeasts.

Castlevania: Legacy of Darkness features a village of cursed "man beasts", of which the protagonist, Cornell, and his childhood friend and rival, Ortega, are ones. It is implied each inhabitant of such village transforms into a different animal; Cornell is a werewolf while Ortega is shown to start transforming into a were-feline beast before he changes into a chimera (product of Dracula's power). The appearance of many other werebeasts throughout the game (weretiger, wereleopard, wereboar, etc.) further support this theory.

Werewolf from the Japanese Rondo of Blood instruction booklet 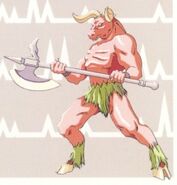 Minotaurs from Rondo of Blood 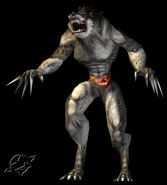 Werewolf from the canceled Castlevania: Resurrection 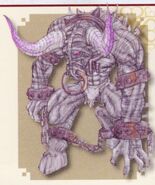 Were Wolf from The Arcade

Minotaur from The Arcade

Werewolf from Mirror of Fate 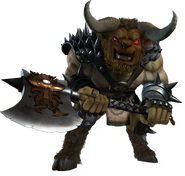 Minotauros' promotional render from Pachinko
Add a photo to this gallery
Retrieved from "https://castlevania.fandom.com/wiki/Werebeast?oldid=281789"
Community content is available under CC-BY-SA unless otherwise noted.