Strikes with a long whip that usually deals heavy damage

The Whip Skeleton is an enemy in the Castlevania series. They carry around a whip, like the members of the Belmont clan, and do great amounts of damage in most of their appearances. Red Whip Skeletons have also appeared in the series; they are soaked in blood and will reassemble after being destroyed, just like normal Red Skeletons. The Whip Skeletons are a type of Skeleton Chain enemies.

Whip Skeletons are similar to the average, run-of-the-mill skeletons, except for the fact that they are armed with a long-reaching whip. They usually take a couple of hits before they go down, so heroes have to stay on their toes and be very careful.

The Whip Skeleton first appeared as an enemy known as Shimon (死門, Shimon? lit. "Gate of Death") in Konami's 1987 Famicom game Getsu Fūma Den. The character is a parody of Simon Belmont, the first protagonist in the Castlevania series. The name "Shimon" is also the Whip Skeleton's Japanese name, which has led to varying translations in the series.

When the Whip Skeleton first appeared in the 1989 NES game Castlevania III: Dracula's Curse, the English instruction booklet called him The Gates of Death instead of "Whip Skeleton" like in Nintendo Power. The reason for this is because the kanji used to spell Shimon is represented with "gate" (門 Mon) and "death" (死 Shi); together, they make Shimon (しもん), a pun on "Simon" (シモン). The Japanese word for "death" is shi, which makes the name a portmanteau of "death" and "Simon", this being befitting as they are skeletons.

The use of the name "The Gates of Death" was first properly translated when Harmony of Dissonance came out. In the English translation, Shimon was called Simon Wraith. 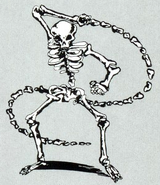 The Gates of Death from the Japanese Dracula's Curse instruction booklet.

Whip Skeleton from the All About Akumajō Dracula guide for Super Castlevania IV.