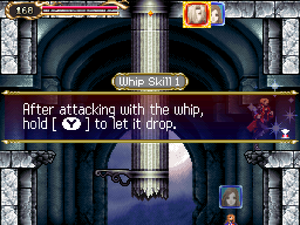 The first Whip Skill allows the player to hold the Y button while using the whip, which then allows Jonathan to suspend the edge. The whip can then be controlled using the directional buttons, dealing minimal damage until the player releases the button.

This skill can be found very early in the game, at the Entrance and above the first Save Point after the Behemoth chase. However, at first it will be out of reach. Only after acquiring the Acrobat Cube may the player return to this place and have access to it.

The second Whip Skill allows the player to perform a diagonal whiplash in mid-air by pressing ↓ + Y.

This skill is granted by Wind as a reward for completing the "Defender of the Stairs" quest, which requires the player to defeat ten Hill Guards, a feat that can be easily achieved first in the Great Stairway.

Retrieved from "https://castlevania.fandom.com/wiki/Whip_Skill?oldid=256011"
Community content is available under CC-BY-SA unless otherwise noted.