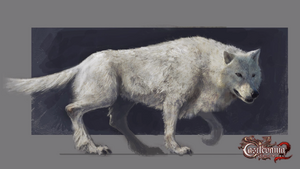 The White Wolf is the symbol of Dracula's love for his family and former life in Castlevania: Lords of Shadow 2. A constant between worlds and his guide from the present to the past. Once called with the White Wolf Medallion, the White Wolf will appear and lead Dracula through a rift between the pocket universe containing his old castle and the real world, where he can explore Castlevania City.

The White Wolf also appears with Marie when Dracula finds her after his battle with Carmilla.

The White Wolf is a form of Dracula's son, Alucard, who guides his father to the past in order to help him remember his forgotten promise. Alucard's ability to transform into a wolf comes from the fact that he died and became a vampire during a full moon.

Alucard's ability to turn into the White Wolf is usable in the Revelations DLC. Alucard can use this power to pass through gates, spikes, and various obstacles. It also allows for long jumping. Until he changes back from a wolf, Alucard's body will remain in one spot, vulnerable to attacks and environmental hazards.

It is said that as soon as a vampire is "born", every detail involved in that instant places a permanent mark on the nature of the new creature. Trevor was converted by his father one night under a full moon, and he was strongly affected by its wild influence. Since then, every night that the moon is full, Alucard awakens the ability to project his spirit in the form of a white wolf and travel through the world without physical limitations. Many travellers have told stories of how, in times of need, an enormous white wolf came to them to guide them along safe paths.

Alucard as a wolf with Dracula.

The portal created by the White Wolf.