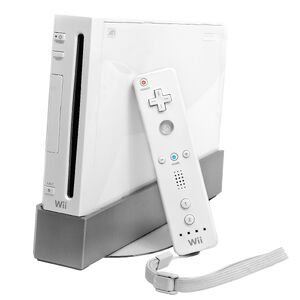 The Nintendo Wii, also known simply as Wii, is a Nintendo console released in Winter 2006, competing with Microsoft's Xbox 360 and Sony's PlayStation 3. It has the particularity to detect movements thanks to the Wiimote, its wireless controller. The only Castlevania game released for the Nintendo Wii on disc format is the fighting game Castlevania Judgment. A reimagining of the first Game Boy Castlevania title, Castlevania: The Adventure ReBirth, is downloadable as a WiiWare title.

Retrieved from "https://castlevania.fandom.com/wiki/Wii?oldid=260004"
Community content is available under CC-BY-SA unless otherwise noted.