Witches are common enemies found in several Castlevania games. They are female humans learned in the black arts and the casting of spells. They are the counterparts of wizards. However, not all witches in the series are evil, and even a few protagonists and supportive characters, such as Sypha Belnades, Maria Renard and Charlotte Aulin, to name a few, fall into this category.

Witches are frequently specialized in flight (either by riding a broom or by levitation) and the ability to cast magical attacks. Some witches are simple enemies roaming around the castle, while others may play a bigger role in the game's story, especially in those cases where they assist in Dracula's resurrection.

Of worth is the mention of Lisa, Dracula's second wife, a 15th Century healer who was arrested and executed during the witch trials going on in Europe at the time, and whose death served as Dracula's motivation to wage war on humanity, finalizing his transformation into the main antagonist of the games and setting off the events that would become the main foundation of the entire Castlevania mythos.

Witchcraft (or witchery) is the practice of magical skills and abilities. The term is commonly associated with those who use metaphysical means to cause harm to the innocent. In the modern era, primarily in western popular culture, the word may more commonly refer to benign, positive, or neutral practices of modern paganism, such as divination or spellcraft.

Historically, the predominant concept of witchcraft in the Western world derives from Old Testament laws against witchcraft, and entered the mainstream when belief in witchcraft gained Church approval in the Early Modern Period. It posits a theosophical conflict between good and evil, where witchcraft was generally evil and often associated with the Devil and Devil worship. This culminated in deaths, torture and scapegoating (casting blame for misfortune), and many years of large scale witch-trials and witch hunts, especially in Protestant Europe, before largely ceasing during the European Age of Enlightenment.

Suspicion of modern medicine continues in many countries to this day because of beliefs about illnesses being the result of witchcraft, with tragic healthcare consequences. Medical care and containment of lethal infectious disease epidemics have often been severely hampered by regional beliefs in witchcraft.

Belief in witchcraft continues to be present today in some societies, and accusations of witchcraft are the trigger for serious forms of violence, including murder. Accusations of witchcraft are sometimes linked to personal disputes, jealousy, and conflicts between neighbors or family members over land or inheritance. Witchcraft-related violence is often discussed as a serious issue in the broader context of violence against women.

In 1645, Springfield, Massachusetts, experienced America's first accusations of witchcraft when husband and wife Hugh and Mary Parsons accused each other of witchcraft. At America's first witch trial, Hugh was found innocent, while Mary was acquitted of witchcraft but sentenced to be hanged for the death of her child (although she died in prison). From 1645-1663, about eighty people throughout England's Massachusetts Bay Colony were accused of practicing witchcraft. Thirteen women and two men were executed in a witch-hunt that lasted throughout New England from 1645-1663. The Salem witch trials followed in 1692-93. These witch trials were the most famous in British North America and took place in the coastal settlements near Salem, Massachusetts. Prior to the witch trials, nearly 300 men and women had been suspected of partaking in witchcraft, and 19 of these people were hanged, and one was "pressed to death".

Witchcraft in Europe between 500-1750 was believed to be a combination of sorcery and heresy. While sorcery attempts to produce negative supernatural effects through formulas and rituals, heresy is the Christian contribution to witchcraft in which an individual makes a pact with the Devil. In addition, heresy denies witches the recognition of important Christian values such as baptism, salvation, Christ and sacraments. The beginning of the witch accusations in Europe took place in the 14th and 15th centuries; however, as the social disruptions of the 16th century took place, witchcraft trials intensified. Current scholarly estimates of the number of people executed for witchcraft vary between about 40,000 and 100,000. The total number of witch trials in Europe known for certain to have ended in executions is around 12,000.

In Early Modern European tradition, witches were stereotypically, though not exclusively, women. European pagan belief in witchcraft was associated with the goddess Diana and dismissed as "diabolical fantasies" by medieval Christian authors. Witch-hunts first appeared in large numbers in southern France and Switzerland during the 14th and 15th centuries. The peak years of witch-hunts in southwest Germany were from 1561 to 1670.

The Protestant Christian explanation for witchcraft commonly involves a diabolical pact or at least an appeal to the intervention of the spirits of evil. The witches or wizards engaged in such practices were alleged to reject Jesus and the sacraments, pay Divine honor to the Prince of Darkness; and, in return, receive from him preternatural powers. It was a folkloric belief that a Devil's Mark was placed upon a witch's skin by the Devil to signify that this pact had been made.

There are two general types of witches in the Castlevania series. The first kind tends to be clothed in robes with or without hoods, and armed with a magic staff of some kind. Some of these witches may be related to the gypsies or the Belnades Clan. Their power comes from the forces of nature and their most common attack are electrical orbs, although they may also master other elements such as fire and ice. They can often hover through the air or teleport. Some of these witches are also spirits, zombies, vampires, or doppelgangers of playable witches. Regular enemies of this type include the Salem Witch (a ghost witch, also referred to as Aliorumnas or Siren) and a witch that appears in Akumajō Dracula: The Arcade. Boss versions of these witches include Drolta Tzuentes, the Belnades cousin turned vampire Camilla Fernandez, Actrise, the zombie impostor Fake Sypha, and Sypha's and Charlotte's Doppelganger. Playable versions include Sypha Belnades and her relatives, Carrie Fernandez, Yoko Belnades, and Charlotte Aulin. The non-playable character Julia Laforeze is also a witch who escaped the witch hunts.

The second kind of witches are of the stereotypical "Halloween" variety. They tend to dress in black, wear the "traditional" wide-brimmed pointy witches' hats, ride broomsticks (usually with lanterns in front), and turn into black cats when they are defeated. Unlike the stereotype, they are not green, hook-nosed old hags, but rather cute young ladies. They usually wear dresses which show off their legs rather than the robes of their counterparts. The first witch of this type appeared in the Famicom game Boku Dracula-kun, and given the nickname of "Marchan". She was a cheerful witch riding along on her broomstick, giving an occasional wink, but would still harm Kid Dracula if she rammed into him. After joining Kid Dracula's side, she later helped him in the Game Boy version, Kid Dracula, with her crystal ball. This witch reappeared in a slightly more serious form in Symphony of the Night, where she was called Salome in North America and Sausine in Japan, although her descriptions indicate her nickname is still "Marchan". Witches of this variety were later usually just referred to as "Witch". A sub-type of this witch are Student Witches, which were a younger variety just learning to fly. These usually crash on the ground after failed attempts to start flight and may then resort to attack with their broomsticks instead.

The Lords of Shadow series features specific witches such as Baba Yaga and the Crow Witch Malphas.

Salome is encountered in the Floating Catacombs. She appears as a young woman bearing the archetypal look of telltale witches, such as wearing a pointy black hat and flying on a broom. As expected, her main means of attack is by employing magical arts, such as releasing white orbs that deal damage on contact, and also by creating a temporary shield that makes her completely impervious to attack. She can also summon cats, which will run across the ground, or skulls, which will bounce around until destroyed. When defeated, she will transform into a cat and attempt to scurry away; being hit by the cat deals small damage. It can be killed, although no further items will drop nor will it yield any experience points. Being touched by the cat while wearing the Cat-Eye Circlet will heal Alucard significantly. One of the easiest ways to defeat her is with the Gas Cloud relic equipped and flying into her to cause damage.

Castlevania: Circle of the MoonEdit

Witches in Circle of the Moon, unlike those found in most Castlevania games, appear as traditional green-skinned old hags riding broomsticks. They fly back and forth and stop in midair to release energy balls below them; these spread out in a spiraling manner, making them somewhat difficult to evade if there are other enemies around.

The Witch can cast a barrier which neutralizes all frontal attacks; attacking her from behind is the only way to damage her. She has two kinds of attack: summoning a fireball, and charging forward. The fireball uses 125% of her strength.

When killed, she transforms into a cat with a hat, which damages the player on contact. It is half as strong as her.

A related enemy, the Student Witch, was also introduced in this game, which as her name implies, is an apprentice witch that still hasn't mastered the arts of casting spells and flying on her broom, often using the latter to whack at enemies instead.

The Witch follows the player around teasingly, disappearing and reappearing and sending blasts of magic with her staff while they are attempting to make it through the Rampart section of Stage 4. 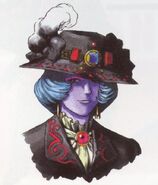 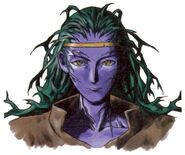 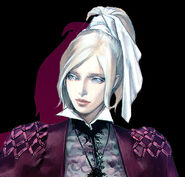 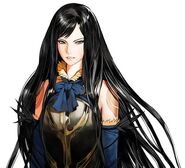 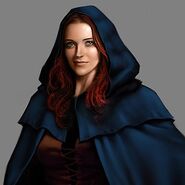 Yoko Belnades
Add a photo to this gallery 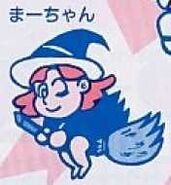 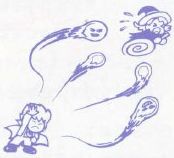 Witch from the official Konami site for Portrait of Ruin

Student Witch from the official Konami site for Portrait of Ruin

Salem Witch from the official Konami site for Portrait of Ruin

Fake Sypha from the official Konami site for Portrait of Ruin

Witch from Mirror of Fate
Add a photo to this gallery

Retrieved from "https://castlevania.fandom.com/wiki/Witch?oldid=286782"
Community content is available under CC-BY-SA unless otherwise noted.