"Kill everything you see. Kill them all. And once Targoviste has been made into a graveyard for my love, go forth into the country. Go to all the cities of Wallachia: Arges!, Severin!, Gresit!, Chilia!, Enisara! Go now and kill. Kill for my love! Kill for the only true love I ever knew. Kill for the endless lifetime of hate before me."
— Dracula commanding the night creatures to kill everything in Wallachia.

Witchbottle is the first episode and pilot of the first season, and the 1st episode overall, of Netflix's original series, Castlevania.

A headstrong young woman seeks out forbidden knowledge, and a corrupt bishop courts disaster by enraging a legend.

Across a field are skeletons set on pikes. Bats fly across the bodies, but a knife pierces through one of them, wielded by a woman standing before a rather imposing castle. She inhales sharply as she knocks on the doors. As the doors slowly open, she enters, and an opulent hallway greets her.

Upon entering the castle, she introduces herself as Lisa of Lupu. She is then greeted by its master: Vlad Dracula Tepes. She wants to become a doctor, but the backward inhabitants of her village have nothing to offer. Everyone says the master of the castle has advanced knowledge of the new "science", which she believes in. Vlad asks what Lisa has to offer in exchange for his knowledge. She replies that, from what she can see, Vlad doesn't travel much, and she could teach him to explore, understand, and perhaps even like, the world outside his castle. Taken aback, he admits that he doesn't have much faith in humanity, though he confesses she is not like most of the humans he has encountered. She rejoins that humanity would benefit immensely if she were allowed to share his advanced knowledge with it. "Start with me", she proposes, "and I'll start with you". With a surprised laugh, Vlad motions her into his laboratory, admitting, "I think I might like you".

Lisa is burned alive on the order of the Bishop, who considers her a witch. The Bishop mistook the medical implements and herbs in her home, the very same she had received from Dracula years before, for "witchcraft". With her last breath, she cries out for Dracula, now her husband, to not seek revenge against the city and beseeches her love to not give in to the same hatred born of ignorance as other humans. The Bishop decries her as she burns, declaring to the horrified crowd that the "witch" is calling out to Satan, her master.

Dracula returns from traveling abroad and arrives at their cottage only to find it in ruins, after being burnt down. He learns of his wife's fate from Mrs. Djuvara, one of Lisa's patients, visiting the house with flowers in hand. Mrs. Djuvara says the Church condemned Lisa as a witch, but she refuses to believe it and instead wishes to pay her respects. In a rage, Dracula warns Mrs. Djuvara to take her family and flee from Wallachia - his last kindness to any member of humanity, in his wife's honor - before vanishing in a whirlwind of flames before her.

In the city square, the fire begins to die, leaving nothing of Lisa but a blackened skeleton. The Mayor of Targoviste congratulates the Bishop for his vigilance, remarking that his actions have assured him a place in heaven. The Bishop brushes off the compliment, saying he would prefer to stay on Earth and continue his "holy" work, since there is so much evil in Wallachia, not to mention the rest of the world, that even a man as pious as he could not root it all out in one lifetime - especially a man, he says darkly, saddled with a less-pious superior like the Archbishop.

They are interrupted as Dracula's visage appears in smoke and flames over the pyre, demanding to know what happened to his wife. The Bishop tries to convince people that Dracula isn't real, just a fiction who "justified the practice of black magic" and his appearance is nothing to fear, only further proof that Lisa was a witch. Dracula is even more enraged, telling the crowd that his wife was a woman of science and the one reason in the world for him to tolerate humanity's "stink" on the land. By taking her from him, he promises, they have signed their own death warrants. He allows the people one year to make peace with their Lord, after which he will return with an army and purge all of humanity from Wallachia.

Dracula prepares to summon an army from Hell, but his son, Alucard, confronts him. He begs his father to reconsider his course of action, urging him to focus his revenge on the one responsible for Lisa's death rather than on the innocent. Dracula retorts that there are no innocents - any one of Wallachia's people could have stood up for Lisa, but instead, they blindly followed the Church as it murdered her. When Alucard declares that he will not let his father tarnish his mother's memory by committing genocide, Dracula flies at him in a rage, grievously wounding him.

A year after Lisa's death, the day of her burning is being celebrated as a festival. Outside the cathedral, the Archbishop congratulates his flock (and, by implication, himself) for their piety and their success in earning God's love. He scoffs that "the Devil" tried to frighten them with empty threats, but here they are, one year later, alive and well, with nothing to fear from the Devil's "lies and illusions". But as he finishes speaking, the sky darkens with clouds, and blood rains from the sky, turning the crowd's happiness to horror and panic. Along with the blood, droplets fall fetal corpses, looking like the failed offspring of bats and demons.

The cathedral's windows shatter, raining huge shards that impale the Archbishop and his priests. The Arch-Bishop has just enough life left in him to look up and see flames envelop the cathedral and form Dracula's face. He says he gave the people a chance to flee, but instead of heeding his warnings, they are celebrating the day of his wife's murder. In an explosion of fire and thunder, Dracula's castle arises amid Targoviste, disgorging an army of monsters that massacre the inhabitants and immolate the rest of the city. Dracula orders them, once Targoviste is empty, to spread through the rest of Wallachia.

In a tavern, in the small town on the outskirts of Gresit, a farmer named Bosha is regaling his half-brother, Kob and the innkeeper, with a story about one of his goats and a man who really likes goats, and how Bosha gave the man his just reward with the blade of a shovel. But now, he complains, he's being fined by the local magistrate because the man went blind, which is just another example of the injustices being heaped on the working class by the "great and good". Moments later, a man named Piter comes running into the tavern, telling the patrons that Dracula's horde is now approaching Gresit. Bosha doesn't seem surprised, saying all of Wallachia's ills, from the mundane to the invasion of Dracula's army, can be blamed on its old families and its so-called "great houses" - like the worst of them all, the Belmonts, who everyone knows dealt with monsters and black magic.

Meanwhile, not far from the group, sits a man alone at a table, indulging in ale and half-listening to Bosha rant on. But when Bosha mentions the Belmonts, the man curses under his breath and tries to hide his face.

Dracula: "You are definitely different to most humans I have met in recent times."
Lisa: "Maybe I can teach you to like people again, or at least tolerate them, or stop putting them on sticks."

Lisa (to Dracula): "I know it's not your fault but, if you can hear, they don't know what they're doing. Be better than them. Please!"

Dracula (to Mrs. Djuvara): "Take your family and leave Wallachia tonight. Pack and go, and do not look back...for no more do I travel as a man."

The Bishop (to Dracula): "You are not real! You are a fiction that justified the practice of dark magic!"
Dracula: (to the Bishop): "A fiction! You take my wife and deny I even exist!" 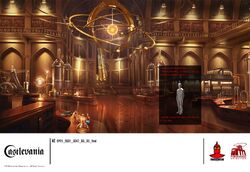 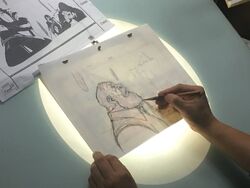 Key art of the Mayor of Targoviste by Mua Films

Key art of the Archbishop of Targoviste by Mua Films