Resurrect the Dark Lord in turn, so that with the ultimate evil he brings there can also exist an ultimate good

Castlevania: Dawn of Sorrow
With Light is a cult founded by priestess Celia Fortner and is the antagonist organization behind the events of Castlevania: Dawn of Sorrow. Its principal ideology is that for there to be ultimate good, there must be an ultimate evil. To this end, it seeks to resurrect the Dark Lord Dracula, either by pushing his reincarnation, Soma Cruz, into succumbing to his true power, or by killing him and inserting one of their own Dark Lord candidates into the position.

Events of Castlevania: Dawn of Sorrow

After an attack on his and Mina Hakuba's life by Celia in Japan, Soma sets out to find With Light's castle headquarters. He later meets Dario Bossi and Dmitrii Blinov, who attempt to kill him so that they can become the new Dark Lord in his place. Dario is stripped of his powers and escapes, while Dmitrii and Celia are killed and their castle is destroyed. What becomes of With Light afterward remains unknown, although it's likely that the cult was disbanded or at least severely weakened after Celia's death.

According to the Akumajō Dracula: Kabuchi no Tsuisoukyoku novel, which is a direct sequel to the events of Castlevania: Dawn of Sorrow, the cult still exists and still has many followers along with Graham's Cult, which also appears in the novel. However, it's indicated that the number of strong sorcerers within the group had significantly decreased, if not vanished entirely, and that the cult seemingly remained leaderless following the death of its founder.

The cult built a castle strongly resembling Dracula's Castle in an unknown location in the world (although the snow in the area would suggest that it is located in the northern parts of the northern hemisphere or at least in a very elevated, mountainous terrain). The castle itself seems to draw power from a location called The Abyss, which appears to be somehow connected to Chaos, the source of Dracula's powers, as the Dark Lord candidates need to travel there to finalize their transformation into the Dark Lord. Another indicator to this would be the presence of Death, Dracula's eternal confidant, guarding the entrance portal to the area. The castle also houses several of Dracula's known servants such as the Puppet Master, Zephyr and Balore (as confirmed by the novel).

A strong indicator that the With Light castle is not Dracula's Castle is the fact that the traditional pillar guardian monsters are missing: Medusa, the Mummy, Frankenstein's creature (although weaker forms of it roam the castle) and the Giant Bat. 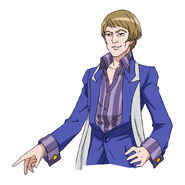