The Wyvern is a boss in the Castlevania series. It is a winged beast related to dragons. It likes high places and lives on a mountaintop.

A wyvern is a legendary winged creature with a dragon's head and wings; a reptilian body; two legs; and a tail.

The wyvern in its various forms is important to heraldry. It is also a popular creature in European and British literature and modern fantasy. The wyvern is often associated with cold weather and ice, and it will sometimes possess a venomous bite and rarely have the ability to breathe fire.

The wyvern has often been confused with the dragon, due to the similarities between them and due to the wyvern being a lesser-known mythical creature. In the middle ages, no clear distinction was made between the two. Since the sixteenth century, in English, Scottish and Irish heraldry, the key distinction has been that a wyvern has two legs, whereas a dragon has four; however, this distinction is not generally observed in the heraldry of other European countries, where two-legged dragons are entirely acceptable.

In the fantasy genre, the wyvern is usually considered to have two legs, whereas the dragon may have either four or none. The wyvern is regarded, moreover, as the distant, lesser cousin to the dragon. Wyverns tend to be smaller, weaker, not as intelligent, and ultimately inferior to the much more ferocious and powerful dragon. While a dragon almost always has the ability to breathe fire, a wyvern will usually be unable to do so. Those that can breathe fire are sometimes termed "fire drakes" and are still considered a lesser form. A wyvern will typically be unable to speak, while a dragon often does have that ability.

The Wyvern can be first seen flying in the distance once Richter leaves the burning village and approaches the castle's entrance, but it will quickly arrive to his location to impede further progress. Flying out of reach and occasionally making swoops at him, breathing flames along the floor, and even grasping onto him with its legs, the Wyvern poses as a respectable foe. The Axe may prove to be an effective weapon to be used against it.

The Wyvern returns once again later in the game, in the Clocktower, brought back to life by Shaft's ghost, although this time in zombified form along with the Behemoth.

This menacing looking beast is as durable as it is big, and its weak spot —its head— is never a fully accessible target due to its constant movement. Mainly, the Wyvern will continue to viciously whip its tail, it will snap its head forward for a sharp-toothed bite attempt, and it will swing its head around before crashing it into the ground so hard that it will become lodged into the earth. When its head is lodged in the ground, it is possibly to leap onto its back and take the monster for a ride. This gives time to attack without fear of taking any damage, and is also the only instance when it opens its stealing window, which gives an opportunity to steal the Shortcake from it before being dropped off.

As expected, it can breathe heavy flames, all this while whipping its head forward and backward to cover a large area. It will other times fly upward a short distance before crashing down its huge frame, causing deadly shockwaves to spread forward. When things get serious, it will take to the air, circle the area, and come flying in with heavy flaming breath; it will do this twice per flight. When it lands, it will do so with the same intensity and cause more in the way of shockwaves.

The Wyvern from Rondo of Blood is back as a common enemy in Portrait of Ruin. It is encountered in the Master's Keep as well as the Nest of Evil. It hovers overhead and either spews multiple flame blasts that hit the ground and bounce unpredictably in either direction, or swoops in for an attack with its outstretched claws.

The Wyvern appears as a boss in Grimoire of Souls. It retains its appearance and attacks from previous games. It was the last boss from the demo. It was also fought during the 1792 era, and was made abnormally strong thanks largely to Hermina rewriting the Grimoires specifically to have it get stronger and placing Richter Belmont in grave danger (and by extension, endangering the younger version of Maria Renard due to her ties to that era).

The Wyvern is one of the challenges Trevor Belmont must face in Pachislot Akumajō Dracula II. Its design is based on its Curse of Darkness appearance. In order to attack it, Trevor latches onto its leg with the whip while in flight. 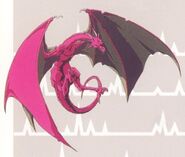 Wyvern from the Japanese Rondo of Blood instruction booklet

Wyvern from Curse of Darkness

Wyvern from The Dracula X Chronicles

Wyvern from The Dracula X Chronicles

An official wallpaper featuring the Wyvern

Wyvern with other enemies in Grimoire of Souls
Add a photo to this gallery
Retrieved from "https://castlevania.fandom.com/wiki/Wyvern?oldid=303242"
Community content is available under CC-BY-SA unless otherwise noted.