Yasushi Asada started playing guitar since he was in elementary school. In high school, he started making music such as DTM and compositions. While studying at the university, he became interested in PC music production and kept learning music by self taught. After graduating from college, he began studying composition and started to make arrangements at the music vocational school. After working on numerous ringtone MIDI projects, he became involved in music production for video games.

His career also includes many projects for guitar. He has a background in hard rock and heavy metal guitar composition and performances. 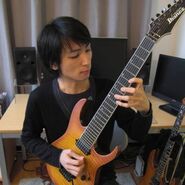