Walk Away
Back in the World
The Great Work
Death Magic

Zamfir is a character in the Castlevania animated series. She was a guard of the royal family of Targoviste. When the members of the royal family were killed, and believing they would come back to life someday, she moved their bodies and the rest of the court underground of the city and reorganized the population in order to protect them from the constant attacks of night creatures.

She was voiced by Toks Olagundoye in the English version of the show.

Zamfir was a citizen of Targoviste and a guard of the royal family. On the day Dracula attacked the city as revenge for the wrongful execution of his wife and the celebration of the event a year later, Zamfir witnessed Dracula's flaming visage in the sky as blood rained down and demons sieged the capitol. Despite surviving the assault and subsequent attacks for weeks, the calamitous event fractured her mind.

She became the head of the surviving guard of the ransacked city, helping hide the remaining nobility deep underground in said ruined municipal's catacombs. At some point, she helped spirit the corpses of Targoviste's long-dead royal family into the grotto as well, coming to believe in her damaged psyche that because they were magicians, the principality would be able to resurrect themselves and save the city at some point. Thus, Zamfir began spreading the lie that Targoviste's hierarchy were in the midst of a "royal sleep" to the underground survivors as a novel tale to keep their and her own spirits persevering. Despite doing what she could to keep this underground court going, she spread the remaining guardsmen thin and prioritized high society over the rest of the surviving Targovistians aboveground.

As a leader of the survivors of the fallen seat of government, Zamfir and her guard found themselves continuously under attacks by night creatures and vampires, even after Dracula's demise. To promote protection of the court from the undead and their hordes, the mandate opted to find and slaughter all remnants of Christian priesthood; likely blaming The Church for the Vampire King's rampage, and harvest all their holy water from every ruined abbey and parish to run it through canals ladled beneath their devastated territory. She later encountered the vampire hunters Trevor Belmont and Sypha Belnades while evading a trap set by the vampire Varney and his henchman Ratko. Aiding the two in fending off the vampire's night creatures, Zamfir told them of the remnants of the city's nobility and the underground court, although acting aloof in the details. When the two witnessed Zamfir's apathy toward Targoviste's aboveground survivors in favor of those underground, she justified it as the need for the ruling class to be prioritized for the good of the whole city. Zamfir attempted to string Trevor and Sypha along in terms of taking them to the underground court and flex her authority but relented when they pressured her. Upon entering the underground court and witnessing the pathetic state of things, including the corpses of the royal family propped up in secret, Trevor and Sypha berated Zamfir in her delusion that everything was going to be alright. Zamfir's insistence that the royal family would awaken from death and save their "golden city" withered under the vampire hunter's scrutiny, and Zamfir admitted her knowledge of her own madness as an after-effect of witnessing Dracula's attack on the city first-hand.

Shortly after, Ratko and Varney attacked the underground court, having found its hidden location, and brought their night creatures to slaughter the remaining survivors. Zamfir fought hard to defend the sanctuary but ended up throwing herself in-between an attack from Ratko meant for two citizens. Keeping Ratko distracted while suffering a mortal wound, Zamfir witnesses Trevor finishing the vampire off and saving her people before succumbing to her injury.

"I went insane the day Dracula hit the city. I saw his face in the sky. I was like the Devil himself punched the world. How could you not lose your mind, seeing hell touch your home? I sleep for two hours a night and wake up screaming ever since it happened."
— Zamfir explaining her insanity in "The Great Work"

She is extremely loyal to the royal family, to the point where it mirrors an obsession. She believes that, as they were wizards, the king and queen will eventually rise from the dead and save Targoviste.

With this mindset, she is able to neglect the residents of Targoviste who need aid, believing that all resources remaining in the city should stay hidden underground. However, she has a change of heart and decides to try to save the citizens instead of protecting the property of the royal family and its adjacent aristocracy after Sypha convinces her that the people are more important. Although typically coming off as calm and controlled, Zamfir is actually quite unstable. Admitting her descent into madness began when she saw Dracula's face in the burning sky at the time he assaulted the borough, having placed all hope in the royal family to help, regardless of her king and queen being long dead.

Despite her flaws, Zamfir is completely dedicated to defending her homeland from vampires and night creatures. She bravely leads her people in battle. Even after being mortally wounded by Ratko, she remains defiant before the vampire and his aggressions against her city.

- Sypha: Zamfir, these two need to be laid to rest. This is just wrong. Do you have a priest?
- Zamfir: No priests.
- Sypha: Zamfir, listen to me. This is over.
- Zamfir: It will never be over. The apocalypse will never claim us. The catastrophe of Targovishte will never happen again. We killed all the priests, you see.
—("The Great Work")

- Sypha: I get it now. You have been suffering for so long. Were you the last person of the noble birth left alive when Dracula struck?
- Zamfir: I am not suffering. This is the great work. This is my glorious duty. I will save everyone by saving them.
— ("The Great Work") 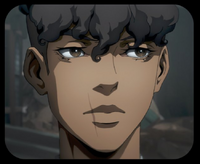 Zamfir in "Having the World".

Zamfir in "The Great Work".