"This discourse is at an end."
— Zead to Saint Germain

Zead (ゼアド, Zeado?) is a main villain who works with Isaac in Castlevania: Curse of Darkness. A priest who claims to seek the end of the curse and gives Hector clues as to Isaac's whereabouts.

Official background: A man that seeks to abolish the curse that is afflicting Europe. He wishes for Isaac to be vanquished so that the curse may finally be lifted. He constantly supplies Hector with information about Isaac and his whereabouts.

Zead appears as a priest who investigates the source of the curse that runs through Europe. Hector encounters him for the first time in the Abandoned Castle, where he is impressed by the power of the young Devil Forgemaster. Introducing himself, he informs Hector about Isaac's location and his motivation to help him, wishing to ward off the curse infecting the country.

Hector meets him a second time at the Mortvia Aqueduct, where he is relieved to see him alive. He informs him that Isaac went to the Forest of Jigramunt in his way to Cordova Town. He also expresses his thoughts on Isaac and the role he plays in the curse of Dracula, but before he can say more, he suddenly feels that something is wrong and hastens to leave, not without apologizing politely to Hector.

Hector finds him once again in the forest, in the middle of a dispute with Saint Germain, where it is revealed to have a grudge against him. He warns him not to meddle in his assistance to Hector, but faced with his interlocutor's refusal, he tries to kill him, although he fails and swears not to let him escape. Eventually, although not directly stated, Zead manages to lock Saint Germain at the top of the clock tower in the Eneomaos Machine Tower, but Saint Germain escapes the trap after a duel with Hector, where both leave alive. It is here where Hector questions his ideals of revenge toward Isaac, thereby preventing him from becoming the next host for Lord Dracula.

Hector finds him in the Aiolon Ruins, just after having attended the fight between Trevor Belmont and Isaac, and the latter's escape. He informs Hector that his rival has gone into hiding in a secret room under the Abandoned Castle. Hector thanks him, while sending him Saint Germain's regards. Panicked, Zead understands Saint Germain has foiled his trap and flees, without clearly explaining why to Hector.

Later, after Isaac's defeat in the top floor of Dracula's Castle and Hector refusing to let the curse consume him, Zead applauds Hector's strength of will, and reveals that he was the one who engineered everything so that Hector would become the host of Dracula in order to allow his resurrection, even if he had resolved to use Isaac for that effect. He finally reveals that he actually is Death in disguise and engages Hector in battle, although he is ultimately defeated, surprised to have been defeated for the first time by a mere human.

He also makes a cameo in the Curse of Darkness manga, where he tells Trevor that his time had not yet come, while also making clear he knows his identity.

Dracula's faithful servant Death makes an appearance in the Pachislot Akumajō Dracula series (I, II and III). He appears as Zead in many of the encounter scenes, but when fought, morphs into a towering Death similar in form to that found in Castlevania: Curse of Darkness. In the second game, Zead arrives to test Trevor. Three floating cards are displayed which represent which boss you may have to fight. This is similar to the mini-boss battles selected by whipping a floating card during the Death battle in Castlevania: Bloodlines. 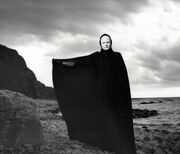 Retrieved from "https://castlevania.fandom.com/wiki/Zead?oldid=297511"
Community content is available under CC-BY-SA unless otherwise noted.