The Zombie is an enemy in the Lords of Shadow games. They almost always spawn in groups, and in some cases a dozen or two may spawn in the same screen. They are the most basic creation of the Necromancers.

Some Zombies rip off their own heads and throw them as weapons, such as the Headless Burrowers in Castlevania: Lords of Shadow and the Zombies in Mirror of Fate.

Zombies are very weak and thus fairly easy to kill. They are dangerous in numbers, however. Do not let them swarm around Gabriel (as many can do a lot of damage). If surrounded, jump out of them and get distance if possible.

Zombie artwork from Lords of Shadow 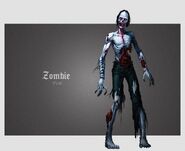 Zombie artwork from Mirror of Fate

Retrieved from "https://castlevania.fandom.com/wiki/Zombie_(Lords_of_Shadow)?oldid=260016"
Community content is available under CC-BY-SA unless otherwise noted.